April 20 - May 4, 2017
The Floating Continent is an event in Final Fantasy Brave Exvius, based on the location of the same name from Final Fantasy VI.

1,000 years ago...when the War of the Magi that had ravaged the land finally ended, the power of magic vanished from the world.

In the wake of a technological revolution, the Gestahlian Empire, which somehow restored the power of magic in hopes of taking over the world, faces off against the Returners, the rebel force that opposes it.

Set afloat by the empire once again, the Floating Continent has now appeared in the Dimensional Vortex. Rain and company shall behold the wonders of this land, and the mysterious girl able to manipulate magic who journeyed across it with her friends...

Fish within the event period. Players could obtain Fish by defeating enemies inside the event dungeon. Having more of the Final Fantasy VI units on the party will grant a bonus to the amount of Fish earned. Those who received a bonus were the then newly-released units Trance Terra (+100%), Setzer (+75%) and Gau (+50%), plus Terra and Kefka, who received their 6★ awakening at the time (both with a +50% bonus). 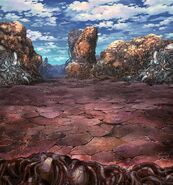