Game Boy
WonderSwan Color
Nintendo Switch
The Final Fantasy Legend, originally released as (魔界塔士 サ・ガ, Makai Toushi Sa·Ga?, lit. Hell Tower Warrior Sa·Ga) in Japan, was actually the first game in the SaGa series and had no direct connection to the Final Fantasy series. This and the other two SaGa games released on the Game Boy system were rebranded as the Final Fantasy Legend series when released in the United States, undoubtedly to bolster sales, as it was only the second RPG Square had ever released in North America.

Just as Final Fantasy was originally inspired by the tabletop RPG Dungeons & Dragons; SaGa was inspired by Gamma World. Its blend of sci-fi and fantasy, absence of experience, race based characters, and collection of various shared skills via mutation or transformations are staples of the series.

The Final Fantasy Legend was released to Japanese audiences on December 15, 1989. International release followed in September of 1990. Eight years later, Squaresoft contracted developer Sunsoft to reprint the game in North America. It would later be upgraded for the WonderSwan Color in the early 2000s, also ported to mobile phones of the era. On August 26, 2020, Square Enix and Nintendo announced that the title would be repackaged alongside its two successors in anthology form as the Collection of SaGa Final Fantasy Legend. The compilation was released December 15, 2020.

At the beginning of the game, players create their initial character to lead the party. This character will be the strongest statistically and will begin with a strong weapon, but once chosen, the selection cannot be undone. They are given a choice of three races:

Battle is a standard turn-based system. Players must first choose to fight an enemy horde, or run from it. When the Fight command is chosen, the player must decide which weapon, spell, or ability they want to attack with, or whether to defend with an equipped shield. However, equipment has durability. Using a weapon, a shield or a magic book will decrease its durability by one use. When it reaches zero, it breaks and must be replaced. Humans and Mutants can equip multiple weapons so they will not be totally useless should one of their weapons break.

Monsters have the potential to inflict status effects on the party when they attack:

The player will receive a Game Over if all units are in Ston or Dead status.

Unique to the SaGa series is the method in which players must manage units' deaths and subsequent revivals. As each unit is recruited, they are given three lives (represented as hearts). Should the unit fall to 0 HP, the unit may be revived at a House of Life at the cost of a heart and a nominal fee. The unit may carry up to five hearts, but a dead unit with no hearts is considered permanently dead and cannot be revived, at which point the unit can be exchanged at a guild.

It has been said that the tower in the center of the World is connected to Paradise. Dreaming of a life in Paradise, many have challenged the secret of the tower, but no one knows what became of them. Now, there is another who will brave the adventure.

In the center of the world is a great tower. This tower connects to many worlds and at the top the entrance to Paradise. A group of adventurers from the world at the base of the tower decide to climb it to explore the various worlds. Along the way they encounter many strange creatures and among them strong monsters based on the Four Symbols who guard the key to the next floor.

In the World of Continent, Gen-Bu, the Black Turtle, has hidden the Black Sphere in the Statue of Hero, southwest of the Tower.

Two dragons guard the divided Blue Sphere in the World of Ocean. Sei-Ryu, the Azure Dragon, holds dominion over the realm from a palace below.

A resistance force builds in the World of Sky as Byak-Ko, the White Tiger, rules the realm with an iron fist in search of the White Sphere.

Su-Zaku, the Vermilion Bird, lays waste to the World of Ruins as he guards the Red Sphere. 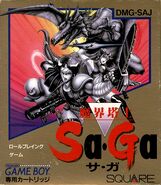 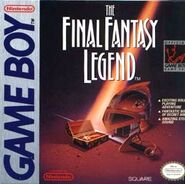 Connections to other titles[]

As often happens in unrelated games or series from the same publisher, Final Fantasy Legend makes references to and from other products by Squaresoft (later Square Enix).

Allusions to The Final Fantasy Legend[]