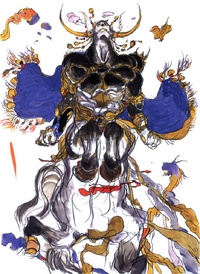 The theme song for the battle against FFV's final boss. The ominous intro transforms into the high-tempo beat of a final battle in this famous song.

The battle theme of Exdeath

An arrangement of "The Final Battle" plays during the second half of the battle against Exdeath in the Deltascape V4.0.

"The Final Battle -arrange- from FINAL FANTASY V" is high-quality arrangement by Takeharu Ishimoto . It is the twentieth track of the original soundtrack's first disc.

The track can be selected automatically for battles including Bartz Klauser, Gilgamesh or Exdeath, or any battle with the Interdimensional Castle as the arena.

The arranged track from Dissidia 012 Final Fantasy and the original SNES version can be bought from the shop for 3,600 gil.

"The Final Battle" appears as a Battle Music Sequence available as downloadable content.

"The Final Battle" is a Battle Music Sequence that can be unlocked by spending 5 sound medals in the music store. It was also the worldwide victory reward for the "White Mage vs. Black Mage" Lux Crystal Battle that took place between February 15, 2017 and February 28, 2017.

"The Final Battle" was rearranged by The Black Mages and included in their third studio album as "Neo Exdeath". It is the second track of the album.

The Final Fantasy V "The Final Battle" is the fifth track of the final disc of this album, "Battle Medley 2012 (Final Fantasy I – XIV)", arranged by Hiroyuki Nakayama.