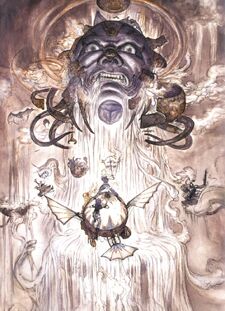 The battle theme used in FFIX's final showdown. The eerie tune of the organ is accompanied only by the moans of the pained—then the real action starts!

"The Final Battle" (最後の闘い, Saigo no Tatakai?) is the final boss theme from Final Fantasy IX. It was composed by Nobuo Uematsu, and is mostly known for its distinguished introduction, featuring a moaning chorus.

"The Final Battle" plays during the battle against Necron at the Hill of Despair. The ominous introductory portion of the track runs until approximately 1:20 and loops continuously during the sequence in which Necron first appears and during the loading of the battle. Once the actual battle commences, the fast-paced battle portion beginning at 1:20 will play and loop if applicable. It was released as the sixteenth track of disc 4 of the Final Fantasy IX: Original Soundtrack.

The original version appears in the music player as the sixth track of Memories of FFIX (Disc 1) - OST album purchased from Coernix Station - Cauthess for 100 gil.

The Dissidia 012 Final Fantasy arrangement is available on the Memories of Dissidia 012 FF album purchasable from Old Lestallum for 500 gil.

"The Final Battle -arrange-" from FINAL FANTASY IX" is an arrangement by Keiji Kawamori. It is a battle theme. Its main difference from the original track is the absence of its signature opening. It was released as the thirty-eight track of the original soundtrack.

The track can be automatically selected as the battle theme for battles including Zidane Tribal or Kuja, or taking place at the Crystal World or the M.S. Prima Vista.

The arranged track from Dissidia 012 Final Fantasy and the original PlayStation version can be bought from the shop for 3,600 gil.

"The Final Battle" is available as a downloadable track for the iOS version. It can be downloaded as part of the Final Fantasy IX Basic Bundle Battle Music, as well as "Battle 1".

A piano arrangement of "The Final Battle" by Shirō Hamaguchi, and performed by Louis Leerink, was included in this album as its thirteenth track.

"The Final Battle" was rearranged and included in The Black Mages' third studio album, retitled "Grand Cross", eponymous with Necron's most powerful attack. It is the album's eight track.

Under the original composer's direction, a DJ duo group called Ante, rearranged this track into a club remix version and included it as the eight track of the album, called "The Final Battle".

The song is part of the 8-bit arrangement album as its ninth track. It is the third section of a medley with the tracks "Silver Dragon" and "Darkness of Eternity", which was arranged by mochilon.

"The Final Battle" was included in this "best-of" release by Tokyopop Soundtrax as its twenty-ninth track.