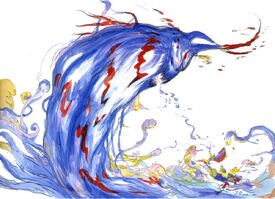 FFIV's final battle theme, the low intro of this song heralds the coming of a formidable enemy in this famous tune which has spurred so many to bravery!

"The Final Battle" (最後の闘い, Saigo no Tatakai?), also known as "Zeromus" or "Zeromus's Theme" is the final boss theme from Final Fantasy IV. It was composed by Nobuo Uematsu.

"The Final Battle" was rearranged by Junya Nakano for the 3D version, heard during the final battle, as well as the fight with Proto-Babil. This version was released as the nineteenth track of the second disc of the original soundtrack.

"The Final Battle" is heard during the fight between Golbez and Fusoya and Zeromus's Malice at the Lunarians chapter.

The original version appears in the music player as the fifth track of Memories of FFIV purchased from Hammerhead for 100 gil.

The original version of "The Final Battle" is part of the Final Fantasy IV Music Pack DLC distributed through the PlayStation Network. It may be automatically selected for Arcade and Quick Battles featuring Cecil, Golbez or Kain Highwind, or taking place at the Lunar Subterrane.

A new techno-rock arrangement is a default battle theme. The original SNES version can be bought for 3,600 gil from the in-game shop.

"The Final Battle" is a Battle Music Sequence available as downloadable content.

"The Final Battle" is part of the battle medley track on the Piano Collections album, called "The Battle".

"The Final Battle" was rearranged and included in The Black Mages' second studio album and titled "Zeromus".

The track appears in the arrangement album featuring battle tracks from several Square Enix games. It is the second part of the mash up with "Battle 1", also from Final Fantasy IV.

The Black Mages' "Zeromus" was the second song performed at their 2005 concerts at Club Citta in Kawasaki City, Japan and Namba Hatch in Osaka City, Japan.

An arrangement of this theme is included on the Final Fantasy IV medley by Tsuyoshi Sekito.