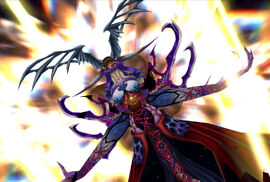 The theme for FFVIII's final boss fight. Voices rise as if in prayer, then the music swells in unsettling eddies as the lonely intro takes on a raging beat.

"The Extreme" is the final boss theme of Final Fantasy VIII. It was composed by Nobuo Uematsu.

On the soundtrack, "The Extreme" has a running time of approximately 6 minutes and 45 seconds. "The Extreme" features a female chorus eerily chanting "Fithos Lusec Wecos Vinosec" in its intro. Additionally, the intro to many of the older battle themes of the Final Fantasy series can be heard after the tranquil intro ends.

"The Extreme" is the track that plays during the final battle with Ultimecia. It is the ninth track of the fourth disc from the Final Fantasy VIII: Original Soundtrack.

Eden's Promise: Eternity (Savage) in Final Fantasy XIV: Shadowbringers, and can be obtained as an orchestrion roll from the same duty.

"The Extreme (Shadowbringers)" is the 61st track in Death Unto Dawn: Final Fantasy XIV Original Soundtrack.

"The Extreme" plays in the music player after the player buys the Memories of FFVIII soundtrack from Hammerhead for 100 gil.

""The Extreme -original-" from FINAL FANTASY VIII" is one of the two default Final Fantasy VIII battle themes. It is the seventh track of Dissidia Final Fantasy Original Soundtrack second disc.

"The Extreme" can be automatically selected for battles including Squall or Ultimecia, or taking place at Ultimecia's Castle.

""The Extreme -original-" from FINAL FANTASY VIII" is a battle theme. It can be automatically selected for battles including Laguna Loire, Squall Leonhart, or Ultimecia, or taking place at Ultimecia's Castle.

In the story mode, it is featured as the background theme of the final duel between Laguna and the Cloud of Darkness.

new jazz arrangement is a default theme. The original PlayStation version can be bought from the shop for 3,600 gil.

"The Extreme" is available as a bonus downloadable content Battle Music Sequence.

"The Extreme" is a Battle Music Sequence included in the base game.

"The Extreme" is a playable Battle Music Sequence. It can be bought in the song store for 5 sound medals.

A rearranged and modified version of "The Extreme" was created and recorded by the Black Mages. The song is the third track on their third studio album.

The song is part of the 8-bit arrangement album as its ninth track.

"The Extreme" is included on the fifth disc of this collector's edition set.

The free fan album by OverClocked ReMix contains a track titled "Ultimecia (Final Fantasy VIII) - All Existence Denied", which is The Extreme with an alternative palette plus vocalization of Ultimecia.