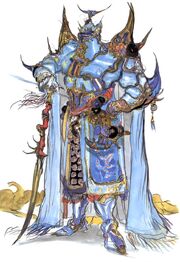 This is the song used when facing the source of all conflict in FFV: Exdeath. A tense melody is carried by drums that sound like the pounding of the earth.

Description for "The Decisive Battle" in Theatrhythm Final Fantasy.

"The Evil Lord X-Death" (覇王エクスデス, Haō Ekusudesu?, lit. Supreme Ruler Exdeath), also known as "The Evil Lord Exdeath", is the theme of Exdeath, the antagonist of Final Fantasy V. It was composed by Nobuo Uematsu.

It begins with a theme similar to the one from the famous murder scene of Alfred Hitchcock's Psycho and contains beats from "Battle 2", the main boss theme. Throughout the theme, measures can be heard from "Ring of Bomb" from Final Fantasy IV compounded by dramatic strings that culminates the suspense.

"The Evil Lord X-Death" is played during cutscenes where Exdeath makes a presence.

It has several arrangements and variations in other tracks, such as "X-death's Castle" (played in Castle Exdeath, the Barrier Tower and the Fork Tower), "The Decisive Battle" (played during any battle against Exdeath and the bosses in the Sealed Temple), and "The Final Battle".

An arrangement of "The Decisive Battle" by Masayoshi Soken titled "Decisions" serves as the battle theme of Deltascape V4.0 where Exdeath is fought as a boss.

It is the 49th track in Stormblood: Final Fantasy XIV Original Soundtrack.

"The Decisive Battle" can be purchased from the PP Catalog for 500 PP after the player completed Shade Impulse Chapter 4.

"The Decisive Battle" appears as a Battle Music Sequence.