Cid Pollendina: Oh, shut up and help me remodel the The End (term) page!
Please expand this article into a full one. The following tasks need to be completed:

"The End", also known as "Fin", is a common phrase used at the end of numerous works of fiction, including many Final Fantasy games after defeating the final boss. The ending screen is usually a black background with bold text "The End".

There is no input generated while in this screen and so one of the options can be to punch in a special code for a minigame like in Final Fantasy IX, or to turn off the system. After a few minutes, the "Prelude" plays, and in some cases in the early games a star field will scroll out of the screen.

Appears in a colorful background with lakes and forests pitted against a partly cloudy blue sky. In both the Dawn of Souls and Origins versions, it instead appears in the classic starry field screen.

Appears on a black background together with a blue orb. In the Origins version, appears in a space type setting, and in the Dawn of Souls version, an even more vibrant space setting.

Appears in the classic star field. In the 3D remakes, it usually appears only on a black screen, written as "fin".

Also appears in the classic star field. In the DS version, appears on a black screen on the bottom while Kluya, Cecilia Harvey, and Theodore are staring at the moon on the top screen. The iOS/Android version is the same, but on a single screen, with a different typeface.

Appears on a black screen surrounded by theater curtains. In the smartphone remake it only appears on the black screen. The typeface is the same as from Final Fantasy IV for iOS/Android.

Appears in front of a star field. In the Anthology rerelease, it is followed by an FMV.

Appears on a black screen for a few seconds, then a star field follows afterwards with the words still on screen. In the Anthology rerelease, it is followed by an FMV.

The End does not appear at all in the ending. The End screen is simply a repeating pattern of flying stars.

Appears as fin in a black screen.

There is no The End scene at the end of the credits; rather, there is an epilogue of Cloud atop of a train headed to the Sector 8 train station, and ends, leading the way to the message "To be continued in Final Fantasy VII".

Appears on a reddish-black screen with what appears to be a sword on the right.

Appears as End while under the sun.

Appears surrounded by a pair of wings. Final Fantasy VIII appears beneath and 1998 Square below that. After a few seconds, the screen is cleared to black. Also, one of Selphie's Limit Breaks is called "The End", which can defeat any foe (even bosses and those immune to instant death, but not the undead).

The minigame Blackjack is playable while the The End screen is shown by entering the following sequence:

In the mobile/Steam/PlayStation 4 versions this option is no longer available; the option to access the minigame is instead made available from the game's title screen upon beating it at least once. The copyright information at the bottom is updated to reference Square Enix, as well as the copyright dates 2001 and 2016.

Completing the game in the versions with an achievements system earns the All's Well That Ends Well achievement/trophy.

"The End" appears between a white symmetrical type symbol featuring the Yevon and Jecht symbols on a black screen. "To Zanarkand" plays in the background. The symbols in Yevon script are A and Z of the alphabet, but they have additional meaning in the world of Final Fantasy X as the symbols representing Yu Yevon and Sin, respectively, and are the sort of "alpha and omega" used by Yevon faith.

Appears on a black background with a symbol which looks like a wave shaped into half a heart and seagulls flying in place of the missing half, akin to the theme of water of Final Fantasy X. It is followed by the player's statistics as well as a New Game+ option. If the player receives the Perfect Ending or "Monkey ending" then "The End" appears against the background of the Zanarkand sunset before fading to the black background with the water symbol. If receiving the Perfect Ending, the player is also presented with the message "Thank you for playing". "The End" is also the name of a Garment Grid in the game.

In the HD remaster, it also shows percentage of the story completed, percentages of all unique creatures created in the Creature Creator, and the amount of times the game has been cleared. Additionally, the final levels of the current party upon completion of the game is also shown.

Appears on a simple black background, after all the credits roll.

Appears on a starry field on the bottom with the Final Fantasy XII: Revenant Wings logo at the top.

It appears on white screen featuring the crystallized Cocoon. "The End" subtitle is written in italics.

The classic "The End" is replaced by a "To Be Continued" in this game as opposed to other entries in the Final Fantasy series. The reason for this, besides the storyline to be concluded in Lightning Returns: Final Fantasy XIII, is to force the player to replay some areas with Paradox Scope fragment skill switched on and discover paradox endings.

Appears on a black screen after the end of the credits and before the "Epilogue" FMV. "The End" is written in plain Times New Roman format with a crystalline texture.

At the conclusion of the quest

Endwalker in patch 6.0, the word "Fin" appears on-screen, accompanied by a pair of lines on the bottom right which reference the song "Tomorrow and Tomorrow".

Yet stand tall, my friend
Our journey will never end

The word "Fin" appears in a white, cursive script against a black screen after the final scene plays at the very end of the game.

Simply appears as The End at the bottom right of a black background.

It was called Fin, an abbreviation of "Finis", which is Latin for "End", instead. The letters are white while the background is black. After the appearance, it will go straight to the main menu and the player may continue to the alternate plot. It appears after the song "Fulfilled Dream Segment" is finished.

Following Final Fantasy Tactics Advance, "Fin" was also used, in front of the artwork of the Grimoire of the Rift.

Following the ending credits and the epilogue text, the kanji (完, Kan?) appears, which is used in its singular appearance to represent "The End".

Appears on a screen with a seedling of the Mana Tree growing in sunlight.

There is no "The End" at the end of the game, instead, the phrase "See you again!" is displayed.

The word "The End" appears in between two Pillar of Sky on the starry night sky.

At the end of the credits, all the words will appear in capital letters spelling "The End" on the white screen along with the copyright information right below it.

Appears in a black screen.

Appears as a bold The End text floating among stars, as a nod toward the traditional Final Fantasy The End screen.

The ending cinematic in Dissidia 012, is the same as the original Dissidia.

For the game's "bad ending," "END" is displayed in spiky white lettering with an X slashed through it horizontally and a streak of white extending from the bottom of the N, as if like blood. No "The End" graphic is displayed during the game's "good/true ending." 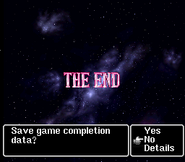 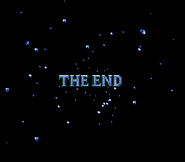 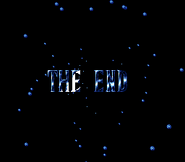 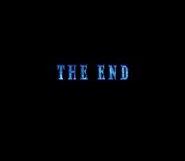 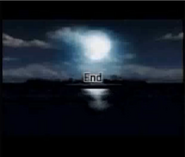 Final Fantasy Tactics: The War of the Lions. 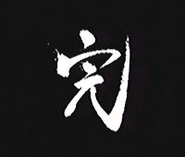