February 17 - March 2, 2017
The Dreadnought is an event in Final Fantasy Brave Exvius, based on the events occurring on the airship of the same name from Final Fantasy II.

In a far away land, peace is set to come to an end.

The emperor of Palamecia has summoned monsters to aid him in this plan to conquer the world.

A group of young warriors have joined the rebel army in their fight against those in power.

Rain and his friends are now to witness their attempt to infiltrate and destroy the empire's machine of destruction, the Dreadnought.

The man put in charge of the Dreadnought, the black armor-clad confidant of the emperor, seems to have some connection to the young warriors.

How will Rain handle the flood of complex emotions that present themselves during this intense battle? Now beins the story of these young warriors.

The Dreadnought was an exploration event which required the player to simply clear all stages to obtain all the rewards. The map is shared between all stages but had a higher difficulty as one progressed further until the entire map was opened at the most difficult stage. Any chest opened would remain open in other stages. 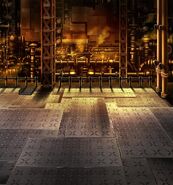