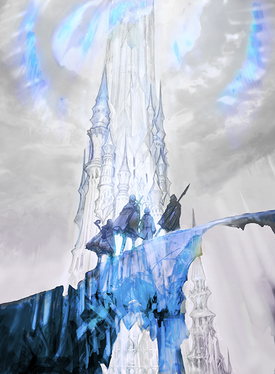 This is the final theme song of FF III's Crystal Tower. The clear melody and tones cheer on our heroes even after the many sorrows they have borne.

"The Crystal Tower" (クリスタルタワー, Kurisutarutawā?), or "Crystal Tower", is a background theme from Final Fantasy III. It was composed by Nobuo Uematsu.

"The Crystal Tower" is background theme for the eponymous location, the second-to-last dungeon. It is the forty-first track of the game's Original Sound Version.

As with the rest of the soundtrack, "The Crystal Tower" (known as "Crystal Tower" in the game's Gallery) was arranged by Tsuyoshi Sekito and Keiji Kawamori for the 3D release, and was released as part of the Final Fantasy III Original Soundtrack, of which it is the fifty-second track. This remastering possesses uses synthesized chorus to simulated a vocal chorus and was given a more epic feel.

"Out of the Labyrinth" is an arrangement composed by Masayoshi Soken and arranged by Yoshitaka Suzuki. It is featured as the background track for the Syrcus Tower raid, part of Crystal Tower. The track features a more active sounding variant, called "Shattered", that is swapped to whenever the raid group is in combat. It was also composed by Soken and arranged by Suzuki.

"Out of the Labyrinth" and "Shattered" are the 32nd and 33rd tracks in Before the Fall: Final Fantasy XIV Original Soundtrack.

"Out of the Labyrinth" and "Shattered" are orchestrated into "Out of the Shattered Labyrinth" by Sachiko Miyano for Eorzean Symphony: Final Fantasy XIV Orchestral Album.

A techno rock arrangement, called "A Long Fall", plays in The Twinning instance dungeon. The piece was composed by Soken and contains elements of "Out of the Labyrinth", "Shattered", "eScape", and the "Prelude". It is the 83rd track in Shadowbringers: Final Fantasy XIV Original Soundtrack.

The original version appears in the music player as the fifth track of Memories of FFIII purchased from Coernix Station - Alstor for 100 gil.

The original release of "Crystal Tower" was included as a bonus battle background theme, unlockable through the PP Catalog for 500 PP after completing Shade Impulse. This theme was not included on the original soundtrack.

After being acquired, this theme can be selected by default for battles including Onion Knight or the Cloud of Darkness, or any battle with the World of Darkness as the arena.

The original version of "The Crystal Tower" is a battle theme. It can be bought for 150 PP from the PP Catalog, and is available from the start.

A new ska arrangement can be bought from the shop for 3,600 gil.

"Crystal Tower" is a Field Music Sequence, available in the base game without requiring downloads. An arrangement of the theme also appears as the background music in Quest Medleys if the final dungeon is a tower. It also appears on the Best of Theatrhythm Final Fantasy Curtain Call album.

"Crystal Tower" is a playable Field Music Sequence. It can be unlocked by purchasing in the song store for 5 sound medals.

"Guardian of Light 2" is an arrangement by Yuzo Takahashi. It was not included in the original soundtrack. It is similar to the remastering of the theme for the 3D release of Final Fantasy III, but possesses higher quality and has no synthesized vocal effect.

An arrangement titled "The Crystal Tower ~ Forbidden Land" is included as the eight track.