The Bozja Incident is a solo duty in Final Fantasy XIV: Shadowbringers, and part of the Resistance Weapons storyline. The final battle of the duty serves as the basis for the Extreme Trial Memoria Misera, the first instance of a solo duty being used as such. 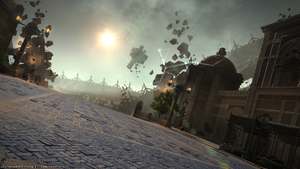 At the request of Lord Hien, the Warrior of Light traveled to the land of Gangos to assist the Bozjan Resistance in their efforts against the Garlean Empire. The resistance sought to recreate the weapons of Gunnhildr's Blades, the legendary guards of Queen Gunnhildr, which were destroyed in the Bozja Incident 15 years prior. However, the key to the weapons' power laid in the magical inscriptions they bore, and all who may have had knowledge of the inscriptions died in the incident.

To recreate the inscriptions, the resistance recruited aetherology expert Mikoto Jinba, who devised a method using the Echo and a crystal focus to dive into a person's memories that they may lay fresh eyes on the inscriptions before their destruction. The Warrior of Light in turn contacted Cid Garlond, one of the few people living known to have seen the inner workings of Bozja Citadel where the weapons were kept.

The Warrior and Mikoto then dove into Cid's distorted memories of Bozja, but it was not a smooth experience as they had to confront Cid's lingering trauma surrounding the incident and his father Midas' involvement in it, including manifestations of the primal Bahamut and the then-Crown Prince Varis yae Galvus. Defeating these shades of the past and helping Cid come to terms with his memories of his father, the group were able to find the weapons and their inscriptions, using this knowledge to make a new line of weapons called Resistance Weapons.

Mikoto fights alongside the player for the entire duty, acting as a healer. Cid assists in the first few battles, while memories of the Scions assist in the final battle.

The early portions of the duty consist primarily of dialogue with Cid and Mikoto, trying to reconstruct Cid's broken memories to allow further progress into the duty. As they progress, Cid will create a passage to Insulae. Here the player must find clues in the ruins to spark Cid's memory. Some Magitek Armor remnants can be found near Cid, while a pile of battle-worn arms can be found back near the entrance to Insulae. Interact with both before speaking to Cid again to continue.

Enemies finally begin appearing in the Forum. The first encounter against a group of Citadel soldiers is completely one-sided, with the soldiers not fighting back. Moving on, the party encounters swarms of hostile Antibodies. The Antibodies attack in two waves, the second much larger than first. While this is going on, directional AoEs will appear and travel through the arena that must be avoided. AoE abilities are a must here to deal with the swarms.

Altered Bahamut is based on the encounter with Bahamut Prime in The Final Coil of Bahamut - Turn 4, with many of the same abilities, though they behave differently here. Altered Bahamut targets Cid early in the battle and puts him out of commission, leaving the player and Mikoto to fight alone for the remainder of the battle.

Altered Bahamut boasts many highly damaging AoEs that need to be dodged in different ways, and will often use these abilities in rapid succession in varying combinations, necessitating some quick footwork. The most dangerous ability is Primal Roar, which casts Cauterize and Earth Shaker at the same time. Since both these abilities have large areas of effect that overlap with each other it can be difficult to find a safe zone in the telegraphs. Earth Shaker causes three alternating fan-shaped AoEs in a row, so the player needs to quickly find the small safe zone between the first Earth Shaker and Cauterize, and then dance back and forth through the Earth Shakers.

The Lunar Transmitter is a brief interlude, the only player input needed to pick some discarded documents.

Cid remains out of commission for the battle against Varis yae Galvus. However, memories of Alisaie, Alphinaud, Ryne, Thancred, Urianger, and Y'shtola appear to aid the player and Mikoto, mimicking an 8-person trial. Thancred will take care of tanking Varis, while Alphinaud and Urianger will assist Mikoto in healing, freeing up the player to focus on damage.

When Varis uses Vivare Militare Est, he launches a Bladesblood at the party. If the player is a tank, a Blade's Pulse object will appear. Interacting with it will enact an Active Time Maneuver in which Thancred and the player block the beam, during which the player needs to tap rapidly to maintain the block, similar to the Susano encounter in the Pool of Tribute. The remaining NPCs will attack the Bladesblood for a short time before Ryne uses Blade Dance to destroy it. If the player is not a tank, Thancred will block it alone and Ryne will not use Blade Dance, and the player will need to provide the bulk of the damage to destroy the Bladesblood.

The theme that plays during the first section of the duty is "A Land Long Dead", which it shares with the Burn. The garlean theme "Imperial Will" plays in the second section. A shortened version of "Answers" plays for the battle against Altered Bahamut, while the Shadowbringers boss theme "Insatiable" plays for the battle against Varis yae Galvus.