The Black Shroud (黒衣森, Kokue no Mori?, lit. Black Clothes Forest), also known as the Twelveswood (鎮守の森, Chinju no Mori?, lit. Grove of the Village Shrine), or Tinolqa (ティノルカ, Tinoruka?) to the Ixal, is a region in Final Fantasy XIV. It is the forest region surrounding the city-state of Gridania. The forest itself is known to take the lives of anyone who does not heed the Elementals, a danger often referred to as the "woodwrath". This makes it a natural filter against those who would bear arms against Gridania, though that hasn't stopped the Ixal, Ala Mhigo, or the Garlean Empire from trying.

It is connected to Thanalan to the south, Mor Dhona to the southwest, and Coerthas to the northwest. A large wall currently blocks off neighboring Gyr Abania in the east.

One of the great City-States of Eorzea. The cityscape is a mosaic of labyrinthine waterways and great wooden structures, so gracefully constructed they seem a part of the surrounding environment.

Woodland in the center of the forest.

Outskirts of the forest nearest to the highlands of Coerthas.

An area of dense woodland and tangled groves. The sylph beast-tribe make their domain in the deepest reaches of the forest.

Wetlands extending southward from the edge of the Twelveswood.

A series of lakeside estates set aside by the Order of the Twin Adder for adventurers.

The elementals in the Black Shroud pervade all aspects of Gridanian culture. The Gridanians respect, and even fear, the elementals for the power they wield, and appease or communicate with the elementals through festivals and ritual dance. The elementals in the woods guard and watch over observant Gridanians, and would normally control creatures of the forest and use them to attack outsiders. A sort of barrier called the Hedge prevents outsiders from being subject to this violent elemental nature, called "woodsin" or "greenwrath". The Hedge occasionally falters, however, and when it does, those affected with greenwrath need to be purified through ritual dance.

The Hedgetrees are sacred trees found throughout the Shroud that maintain the Hedge. Three Hedgetrees can be visited in-game, in the Central, East, and North Shroud.

The Black Shroud saw moderate use, although often not by choice. The addition of the Primal Good King Moggle Mog XII made Crimson Bark (or rather its related gate, Turning Leaf) a gathering place for primal hunters. Because of the narrow, restrictive, and maze-like passages, activities like Behest, Guildleves, and Chocobo Caravans, which could be done in the other regions as well, were usually not pursued in the Black Shroud.

Many quests led to the Black Shroud at some point, likely due to Gridania's expertise in all things aetherial, and also that its winding trenches and spooky atmosphere lent to a sense of utter waywardness and unease. The area's battle theme is titled "Pulse of the Forest", which aptly describes the sense of being surrounded by life, and subject to the tension between man and Elemental. It was certainly a much less welcome place before the Calamity.

Also worthy of note, while all regions had areas populated by over-leveled creatures (some of which exceeded level 90), the Black Shroud in particular was very unkind to anyone wandering off the beaten path. The final quest for White Mage led players to the great tree in Sorrel Haven, which was once guarded by high level raptors and malboros.

Videos of the Alpha version were presented by Square Enix to show off gameplay in the Black Shroud, as well as the scenery itself. Gone are the winding trenches and ramps, replaced by a forest populated predominately by vast trees, with ample space between them for relatively unrestricted movement. 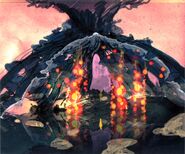