The Black Mages were a Japanese hard rock band formed by Nobuo Uematsu, composer for various video games in the Final Fantasy series, that played Uematsu's musical compositions in a progressive rock or prog-metal style. The band was formed in 2003, and disbanded in 2010, after seven years and three studio albums.

The band's live performances were rare, with only two concerts that celebrated album releases. The first — "The Black Mages LIVE" — was held in Shibuya and later released on DVD exclusively to fanclub members. A second concert — "LIVE above the sky" — was held in Kawasaki City and similarly released on DVD to fanclub members. However, The Black Mages have made appearances in various Final Fantasy-related concerts, such as VOICES: Music from Final Fantasy and More Friends.

On 7th of August 2010, Nobuo Uematsu announced the band has disbanded. 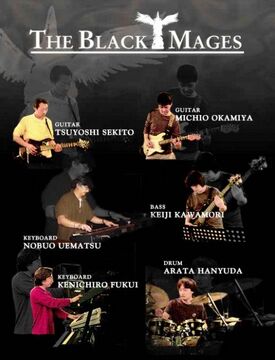 The idea of rearranging the Final Fantasy music into rock style and putting that out as an album/CD was my idea, but initially I wasn't going to take part in the band. I was just going to be taking on the producer role. But the members -- especially the guitarist -- said, "If Uematsu-san's not going to be part of the band then I'm not going to do it either." I was sort of brought back into being a part of the band. That's how we got together.

In 2000, Square Enix employees Kenichiro Fukui and Tsuyoshi Sekito formed an experimental partnership to compose for the All Star Pro-Wrestling video game in a rock music style. After the video game's success, the two continued to compose in the same style. In 2002, Fukui and Sekito decided to arrange some of Nobuo Uematsu's compositions. Uematsu, a fan of rock music himself, enjoyed the arrangements. Regretting that the public would not be able to appreciate the duo's talents, he decided to form the Black Mages. One of the band's staff members, Mr. Matsushita, suggested the name "the Black Mages," (in Japanese) but they thought the name wouldn't stand out enough, so they would use the English version of that.[1]

In 2003, Kenichiro Fukui and Tsuyoshi Sekito arranged, interpreted and sequenced ten combat themes from various Final Fantasy games, with Nobuo Uematsu as producer. Album containing these tracks was released eponymously on February 19, 2003. After being met with success, Uematsu decided to organize a concert in tribute to the album. Fukui chose to play keyboards, while Sekito chose to play guitar. Because this was not enough to perform the arrangements, several members from Square Enix joined. Keiji Kawamori joined to play bass guitar, Michio Okamiya to play guitar, and Arata Hanyuda to play drums. With persuasion from the group, Nobuo Uematsu began playing the keyboards. The Black Mages performed on April 26, 2003, at Shibuya-AX in Tokyo. This was followed by a 30-minute performance at the Kanagawa University festival on November 3.

At the beginning of 2004, Nobuo Uematsu announced the prospect of a second album. On April 21, an arrangement album for the Dark Cloud 2 video game titled Dark Chronicle Premium Arrange was released. It features the first full appearance of The Black Mages on a studio album, who were asked by TEAM Entertainment (the publisher) to arrange and interpret "Flame Demon Monster Gaspard". This performance heightened anticipation for the second album, and in July, Uematsu announced that the album was in the recording stages. On December 22, 2004, The Black Mages II: The Skies Above was released. The Skies Above features a wider array of pieces by not focusing on battle themes, unlike the first. In 2005, the album was the subject of a concert on January 22, January 23 in Kanagawa, and January 28 in Osaka.

On March 19, 2008, The Black Mages III: Darkness and Starlight was released. Like The Skies Above, it does not only feature battle themes, but also other, more melodic themes or the album naming rock arrangement of Final Fantasy VI's opera Maria and Draco, "Darkness and Starlight". Special mention should also be given to the track "Life ~ In Memory of KEITEN ~", which was included on the album as tribute to a fan who died from leukemia two months prior to the album's release.

Sadly, Nobuo Uematsu declared the Black Mages disbanded on 7th of August 2010 due to scheduling conflicts between the band members and copyright issues with Square Enix.

When it came to selecting songs for an album, Uematsu would choose a song, after which the other members would give their feedback so as to evaluate if it was going to be recorded or not. When deciding on the arranger of each piece, the members would have a show of hands first, and afterwards decide who would be the best choice for each song. The other band members would send demos to Uematsu, and then discuss what the final arrangement would be like.[2]

Most of the basic synth parts were programmed by each arranger. If there were instruments the band members felt needed to be recorded live, they would go to the studio. The band used the studio for the drum recordings and for re-recording the guitars using an amplifier. However, it was difficult for all the members find the time to record together and as a result, the band never had much time to gather in the studio at the same time, so sometimes recordings started late at night.[2]

The Black Mages have participated in several concert events.

This overnight concert introduced the song "Matoya's Cave" (which would feature in their next album) and included additional solos not seen in their first album. During the introduction of band members, Michio Okamiya performed a rendition of the "Chocobo's Theme" and Nobuo Uematsu performed the intro to Deep Purple's "Smoke on the Water".

This free concert was part of the Kanagawa Jindai Festa. Because Nobuo Uematsu graduated from the university they were performing in, The Black Mages all wore the student uniform colors (white shirt, black pants).

This was The Black Mages' first appearance in North America, and thus far only performance outside of Japan. "Advent: One-Winged Angel" was performed with orchestral accompaniment. A synchronization conflict between drummer Arata Hanyuda and composer Arnie Roth forced Uematsu to cease the performance of the song entirely, leave to the backstage alone, and remedy the issue personally before returning. The result was a rendition of "Advent: One-Winged Angel" that is dissimilar to that which appears on the film's OST.

The Black Mages performed "Advent: One-Winged Angel" along with the Prima Vista Philharmonic Orchestra. The song was played twice, the second time as an encore.

Music
Retrieved from "https://finalfantasy.fandom.com/wiki/The_Black_Mages_(band)?oldid=3346287"
Community content is available under CC-BY-SA unless otherwise noted.