September 26, 2000
2001 (Music Inspired by)
The Best of Final Fantasy 1994 - 1999: A Musical Tribute is a "best of" type album of tracks from Final Fantasy VI to VIII, arranged and remixed by Sherman F. Heinig and performed by the Hollywood Symphony Orchestra. Vocals were performed by Tamara Woodman in "Liberi Fatali".

Additionally, the re-release titled Music Inspired by Final Fantasy features a new track from Final Fantasy IX, arranged and performed by Project Majestic Mix, at the very end of the album. 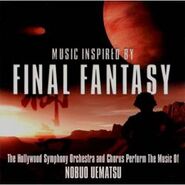 Cover.
Add a photo to this gallery

Music
Retrieved from "https://finalfantasy.fandom.com/wiki/The_Best_of_Final_Fantasy_1994_-_1999:_A_Musical_Tribute?oldid=2874491"
Community content is available under CC-BY-SA unless otherwise noted.