The Angel of the Slums

The Angel of the Slums

Kids on Patrol
The Angel of the Slums is an Odd Job in Chapter 8, "Budding Bodyguard", in Final Fantasy VII Remake, taking place in the Sector 5 Slums. After Cloud Strife and Aerith Gainsborough help some missing children at the Leaf House in the Sector 5 Slums, Oates suggests they speak to a man in the area.

Talk to Damon in the southern end of the Center District to begin the quest. Head to the community center just north from him and talk to Mireille Dudley and then return to Damon. After talking to him, travel to Lookout Point, which is located in the northeast end of the Sector 5 slums, past the Nuts 'n' Bolts Hills. In the southeastern corner of Steel Mountain is a ladder that leads up to the Lookout Point, where the Chromogger is fought.

Lightning, meaning Cloud can link the

Elemental Materia with the

Silence and has strong, yet very slow and telegraphed melee attacks. Both characters should cast

Thunder against it when possible, and using Arcane Ward to cast spells from a distance can be effective. Aerith should stay at a distance, dodging the Chromogger's attacks, while Cloud engages it in close combat. Cloud can also engage Punisher Mode while the enemy is targeting Aerith to deal more damage. Chromogger is difficult to stagger, but can be pressured with lightning attacks.

After the Chromogger is defeated, the Guardian Angel's calling card is found on a desk in the northeast end. Return to the reporter to complete the quest to earn 2,000 gil.

Chromogger is significantly more durable, and its slow attacks can potentially kill a character. One great tactic against it is to use Arcane Ward with

Thundaga at a distance. By placing a ward down and casting Thundaga with both Aerith and Cloud, Chromogger can be overwhelmed with magic damage that will keep knocking it back. Aerith should also pair lightning materia with

MP Absorption Materia for sustainability. If using this tactic, the characters should wait to cast the spell until Chromogger is a fair distance away from them, or is not about to charge its Skull Cracker ability. 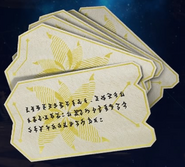