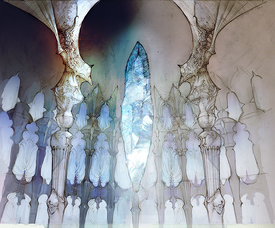 Anticipation and anxiety battle in this mysterious song that plays in the caves home to the five Crystals of FFIII: Wind, Fire, Water, Metal, and Earth.

"Crystal Cave" is the second theme heard and the second track of the game's Original Sound Version, right after the introduction. As its name implies, it is the background theme for the dungeons where the Crystals can be found: Altar Cave, Molten Cave, Cave of Tides, Goldor Manor and the Ancients' Maze.

As with the rest of the soundtrack, "The Altar Cave" (known as "The Cave Where the Crystal Lies" in the game's Gallery) was arranged by Tsuyoshi Sekito and Keiji Kawamori for the Nintendo DS release. It was released as part of the Final Fantasy III Original Soundtrack, of which it is the fourth track.

An arrangement of this song, titled "Hubris", is featured in Patch 2.1 A Realm Awoken and it plays in the Crystal Tower dungeon, Labyrinth of the Ancients. A more aggressive arrangement, titled "Ever Upwards", plays during battles in the dungeon.

Each of these themes was co-composed by Masayoshi Soken, Nobuko Toda, and Yoshitaka Suzuki, and arranged by Toda and Suzuki.

"Hubris" and "Ever Upwards" are the 98th and 99th tracks in Final Fantasy XIV: A Realm Reborn Original Soundtrack.

An arrangement of "The Altar Cave" by Tsuyoshi Sekito named "Crystal Cave -arrange- from FINAL FANTASY III" was released as the tenth track of its soundtrack.

It is the representative location theme for Final Fantasy III, and plays in select gateways of Confessions of the Creator and all gateways of the Onion Knight's chapter from Light to All.

"Crystal Cave" is again available for play as a Field Music Sequence track, but this time it is available in the base game and does not need to be downloaded.

An arrangement of "The Altar Cave" by Kenji Ito serves as "Behemoth's Theme", the character theme for the Behemoth. It is the fourteenth track of the game's Original Soundtrack.

"The Altar Cave" is part of the "The Evil Power of the Underworld" track, the first in the album. It was arranged by Nobuo Uematsu and the narration was performed by Jeff Levy.

An arrangement of "The Altar Cave" by Hiroyuki Nakayama is included in this album of piano arrangements. It is the eleventh track of the album.