Thamasa is a remote hamlet lying on Crescent Island on the far eastern edge of the world map in Final Fantasy VI. It is one of the last places the party visits in the World of Balance. On the surface, Thamasa is nothing more than a humble backwater village, but the villagers conceal a secret from outsiders.

The party can visit Thamasa as soon as they acquire the Blackjack, but the shopkeepers will refuse to sell them anything and there are no events to trigger at this time.

Thamasa was founded after the end of the War of the Magi. The Magi, humans who could use magic, were scapegoated for the war and an inquisition began, during which most of the Magi were hunted and executed. A handful escaped and founded Thamasa well away from civilization to live in peace. The descendants of the Magi retain the ability to use magic, but it is weaker than their ancestors' as the bloodlines have waned. Publicly, magic is forbidden by the Mayor of Thamasa to avoid unwanted attention from outsiders, but citizens continue to use magic in private.

Through a series of flashbacks and dreams, it is gradually revealed that Shadow, then using his original name "Clyde", came to Thamasa while fleeing authorities for a train robbery he had committed with his partner Baram. Clyde stayed in Thamasa an unknown amount of time, and fathered a daughter, Relm, with a citizen of Thamasa. Eventually Clyde left town to keep his past from catching up with his family, taking the family dog Interceptor with him. Relm's mother passed away (possibly before Clyde left - it is not specified), and in the absence of Clyde Relm was taken in by a family friend, Strago, who raised her as a granddaughter.

Terra, Locke, and Shadow arrive in Thamasa in their conjoined search for rogue espers with the Empire and General Leo. They meet Strago and Relm, who insist the village is just a normal town. While staying the night in the inn, Strago wakes them up with news Relm is trapped in a burning building. With the inferno building, Strago breaks the taboo over magic usage and tries to fight the flames. The citizens including the Mayor rally to help him, but the fire is too strong, and Strago rushes into the building with Locke and Terra to get Relm.

While the three find Relm with Interceptor, but the house begins to collapse and they are knocked unconscious. Shadow arrives and gets them to safety. The next morning Relm recovers and Strago explains the truth of the townfolk's magical abilities and agrees to help them search for the espers in the Esper Caves to the west. Relm demands to come but is refused, and Shadow departs, insisting he will search for the espers on his own. The trio departs to the Esper Caves, unaware Relm is following them.

After finding the espers, General Leo meets with their leader, Yura, to discuss the Empire's desire for peace, but Kefka arrives, incapacitates the party, and tells Leo the ceasefire was a ruse to draw the espers out of hiding. In the ensuing battle Kefka crystallizes the espers and seizes their magicite remains. Kefka orders his Magitek soldiers to burn Thamasa to the ground, and Leo, refusing to allow this, attacks Kefka. Kefka uses an illusion to feign a battle with Leo and then masquerades as Emperor Gestahl to mock his loyalty, but slaying him. At this, the Sealed Gate to the Esper World is thrust open and espers fly to Thamasa to aid in the battle. Kefka dispatches his own soldiers while nullifying the espers' powers, and then mass executes them and seizes their magicite. Satisfied for the moment, Kefka departs, leaving the party to mourn Leo's death. The party also finds a wounded Interceptor that returns to the village, and presume Shadow has been killed as well.

The members of the Returners who had remained behind in Vector arrive shortly after in a repaired Blackjack, having been alerted to the Empire's treachery and escaped. The party regroups aboard the Blackjack as Gestahl and Kefka raise the Floating Continent. Afterward, Strago's friend Gungho returns to town. He and Strago have a mild argument over Strago's failure to find the legendary monster Hidon that they hunted in their youth; Gungho accuses Strago of giving up but Strago claims he had no choice since Hidon only lives on Ebot's Rock, which has sunken into the sea.

In the World of Ruin, the party brings either Shadow or Relm to Thamasa to rest after rescuing them from the Cave on the Veldt. Whom the party finds depends on if they waited for Shadow on the Floating Continent—if they waited, Shadow will have survived and is found in the cave. The rescued ally leaves town after recouperating.

Later when Strago and Relm returned to Thamasa, they find Gungho injured from a battle with Hidon now that Ebot's Rock has resurfaced after the cataclysm. Strago sets out to Ebot's Rock to defeat Hidon and avenge his friend. With his victory Strago returns to Thamasa and boasts to Gungho of his victory, and that night regails him with the tail of his battle with Hidon to the extent he falls asleep. Gungho leaves him be and is confronted by Relm, who knew he was faking his injuries to motivate Strago to settle one of his old personal demons.

In the game's ending the destroyed house is rebuilt by the townsfolk.

Thamasa is a hilly town with mountains and trees on all sides and passages between the mountains providing access. The center of town is dominated by a central square with a tree in the middle, and pathways branching off through the town. Merchant services are in the southern end of town, and civilian housing is on the northern side, with the Mayor's house on a hill. The east side of town hosts a small graveyard. Later, General Leo is buried in a small clearing in the trees.

A hidden Memento Ring can be found in Strago's house. On the second floor, inspect the west wall by the table. This item can be acquired any time the player can access the second floor of the house, with the earliest opportunity being after meeting Strago and Relm.

After taking the ship from Albrook on the Imperial expedition, head to Thamasa and speak to Strago in the house in the north-east part of town. After the scene ends, go to the inn and rest - consider de-equipping Shadow of any gear first, especially if he has an esper equipped. In the night Strago will come to the party for help. Outside speak to him by the Burning Home and a cutscene will begin, after which the party will be inside the Burning Home with Strago, but without Shadow.

After the Burning Home is completed, after a cutscene Strago will formally join the party and Shadow will leave, and the party has the objective to head to the Esper Caves to the west. The party returns to Thamasa upon completion of the esper caves, and after a cutscene will be in control of General Leo as a temporary character. Speak to Kefka to initiate a battle; Leo's shield will block most of Kefka's spells and they will do little damage otherwise, so Leo can easily defeat Kefka. After several more cutscenes, the party will be on the world map and the Blackjack will be landed near Thamasa, board the ship to witness the rise of the Floating Continent.

When arriving at Thamasa from the Imperial expedition, but before meeting Strago and staying at the inn, the player can witness two events the foreshadow the residents' magical abilities. When attempting to walk behind Strago's house, an event will trigger where a mother and her child prepare to cast magic before they notice the party and hurry away, and walking behind the large house on the east side of town triggers a scene of a child practicing a fire spell before he notices the party and flees.

Once the party has been to the Cave on the Veldt and rescued their party member found there - Shadow if the party waited for him when escaping the Floating Continent, and Relm if they did not wait - they will bring that character to Thamasa to recover. Depending on the party member rescued, a flashback will be witnessed. After this, the player can proceed to Dragon's Neck Coliseum to re-recruit Shadow, or Owzer's Mansion to re-recruit Relm, depending on which was rescued. If Shadow was rescued, Relm will already be at Owzer's Gallery.

Upon returning to Thamasa in the World of Ruin with Strago and Relm in the party, a cutscene will play when entering the town through the arsenal and item shops, where Strago learns his friend Gungho was injured hunting Hidon and vows to avenge him. Viewing this cutscene causes a cave entrance to appear at Ebot's Rock, Hidon's lair. The party automatically returns to Thamasa in a cutscene upon Hidon's defeat.

Hidon is the only enemy in the game to use Strago's ultimate Lore, Grand Delta. If the player misses out on learning it, speak to Gungho repeatedly; eventually he'll mention Hidon has reappeared and Ebot's Rock can be re-explored and Hidon refought. 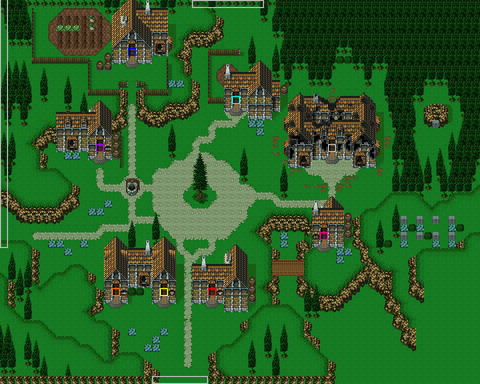 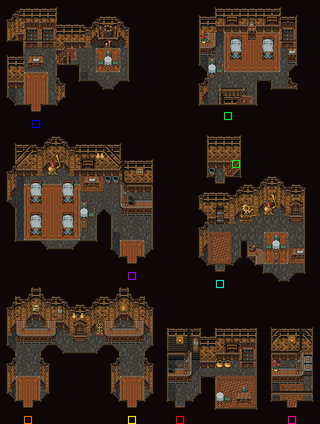 Thamasa is the setting for a regular dungeon and is also featured in the Challenge Events Legendary Plunder, Back to the Skies, and Assassin in Black.

Terra's magic opens the Sealed Gate to the Esper World, and the espers spill out, driving away the Imperial forces. Fearing the espers, the Empire sues for peace, and asks for the Returners' help in tracking down the scattered espers before they cause more damage.

"Strago's Theme" is used as the background theme for Thamasa, which is a recycled theme that was composed for the original Final Fantasy, but never previously used. The track that plays during Kefka's raid is "Metamorphosis".

A common backstory for Kefka is that he was born in a Thamasan orphanage before leaving for Vector and joining the Empire. However, this backstory springs from a Celes x Kefka doujinshi that made up several aspects of both characters' backstories. The doujinshi was not published by Square Enix and the backstory elements it introduces are non-canon.

There is an unused map of Thamasa in the game data containing two sprites, Clyde and Baram. It seems this map was to be used for a Shadow dream sequence that ultimately was left out of the game and not completed.

Thamasa has an exit zone to the world map along its northern edge, directly behind Strago's house. However, the tiles the zone is on are all impassible, so the party cannot reach it. This exit zone exists in both the World of Balance and World of Ruin maps of Thamasa.

In an annotated draft map of the World of Ruin, Thamasa is labeled as "Cultivating Village" (開拓村, Kaitaku Mura?)[1].

Thamasa on the World of Balance map (iOS/Android/PC).

Thamasa on the World of Balance map (GBA).

The Empire signing a peace treaty with the espers (GBA).

Mayor of Thamasa after the battle (GBA). 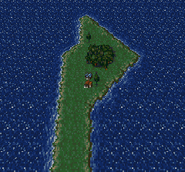 Thamasa in World of Balance (SNES). 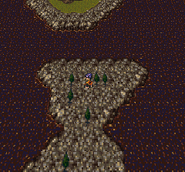 Thamasa in the World of Ruin (SNES).

General Leo's grave in the World of Balance (SNES).

General Leo's grave in the World of Ruin (SNES).

Thamasa in the World of Ruin (SNES).

Thamasa could be derived from "thaumaturgy," a synonym for magic.