Th'uban is an Original Creation monster, bred in the Monster Arena in Final Fantasy X. Its form is reminiscent of the Sanctuary Keeper fought at the Summit of Mt. Gagazet. Th'uban is available to fight after six monsters in the Species Conquest have been bred.
See also: Brachioraidos

All attacks will be countered with Condemn, a nasty physical attack that inflicts Delay (strong) and removes several beneficial status effects from the party: Auto-Life, Haste, all Nul statuses, Protect, Reflect, Regen and Shell. Attempting to inflict Delay or Slow will cause Th'uban to counter with Haste. If struck by a reflected spell, it will use whichever counter it used last, or Condemn, if struck by a counterattack prior, or will do nothing if no counter has been used yet.

Th'uban drops weapons with Triple AP and Triple Overdrive, and armor with HP +% abilities, HP +30% being fixed. Its equipment drops provide a 6% critical hit chance bonus instead of the usual 3% (this is relevant to weapons and armor pieces, but only to attacks that deal physical damage).

High Agility, Defense, and Strength are vital. Ensuring a powerful team hitting for 99,999 each time makes the battle easier, and with a max Defense stat of 255, its counterattack Condemn should only deal around 600 HP. Wakka's Attack Reels and Tidus's Blitz Ace Overdrives can rack up around 2 million damage by executing each perfectly.

Permanently attached boosts, such as Auto-Haste and Auto-Protect, are needed for the party to withstand Thu'ban's most powerful attacks. Since auto-abilities don't dispel, they make good equipment for the party to use. 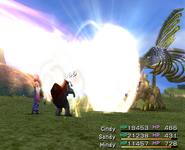 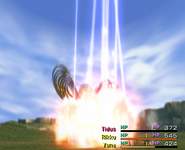 [view · edit · purge]Thuban is a star in the constellation known as Draco, which in turn means "dragon". It may be also an Arabic word (ثعبان) for "Snake".