The minigame in Final Fantasy IX was originally called "Quad Mist" in Japanese versions, with its name written in English text in the center of the board. The name "Tetra Master" used in the English localization of Final Fantasy IX is the name of this minigame in both Japanese and English.

Players accumulated currency and leveled up their cards as they played the game. Winnings could be spent on themed booster packs containing random cards or used at auctions to bid on specific pieces. Like the original minigame, a victorious player could claim a card from the opponent's hand. In three player matches the winner could take a card from each opponent and the runner-up could take a card from the least successful contender.

Players could own multiple copies of the same card, and due to the nature of the game, these cards would vary in stats and arrow positions.

The card type (Physical, Magical, Exploit, Assault) could not change on a card, and were listed as P, M, X, and A respectively. The other values were Offense, P. Defense, and M. Defense, and could increase by using the card.

Stats were listed in two ways:

A card could have 0-8 arrows bordering it on its edges and corners. Arrows were used to engage other cards. Stats were used to determine the outcome of card battles.

In the card menu, the cards were represented with an icon depending on the category it fell under. These included the categories from the original game, and an additional one for characters.

Setting up a game[edit | edit source]

After selecting Play from the main menu, the player could select a game lobby. The lobbies were divided based on language and referred to as "zones".

At the time of closure, the English zones were:

And the Japanese zones were:

When setting up a game at a table, restrictions could be set up for the table, including setting a password to enter, whether observers were allowed to spectate the game, and the level of cards allowed to be used.

Game rules could also be toggled.

Tetra Master could be played two-player (on a 4x4 board) or three-player (on a 5x5 board) with 0-7 spaces being randomly filled in with special tiles. The colors of players were blue, red, and green.

When setting up a "VS. COM" game, the player had to choose opponents. Computer-controlled opponents were based on characters from Final Fantasy IX and had set values for average card rank and wager. 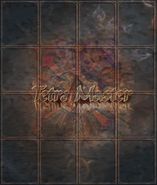 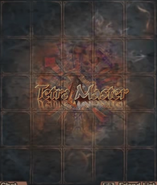 5x5 3-player board.
Add a photo to this gallery

Turn order was randomized. Players took it in turns to place their cards. The game ended when all cards were placed. The order of victory was decided by which players had the most cards of their color on the board.

Three things could happen when placing a card. It could capture another card, enter a card battle with another card, and trigger special tiles.

Card battles were engaged when a placed card had an arrow pointing to another card with an arrow pointing back. The winner flipped the opposing card. After this a "Combo" could be triggered where all cards pointed to by the captured card also had their color changed to the winner's color.

A Perfect was scored when all the cards on the board were one player's color.

The "Range" option could be enabled to view the percentage chance of winning a card battle.

The player in first position could choose to increase a card's stats, and one of its three stats at random was increased.

If trade rules were on, players could pick a card from every player they victored over. In a three-player game, the first player would take a card that ended the game in their color from both other players, and the runner-up would take a card that ended as their color from the loser. With a Perfect, the winner took all cards. In a VS. COM game, this rule was always on.

A game could be exited at any time. If the rules dictated it, the player could forfeit all five cards to their opponent. In a VS. COM game, this would cause one to lose all five cards.

The card with the highest stat in the battle had the highest chance of winning, however, an element of randomness was used to make the result not guaranteed.

The winner of the card battle flipped the loser to its own color.

A gray stone block. Cards could not be placed here.

Tiles with a question mark. Placing a card with an arrow pointing to one of these tiles with an arrow could cause a random effect. After being used, the block broke and became an available tile.

Each turn a rotating block pointed in one of the eight directions at random. Interacting with the block caused it to shoot an electrical blast along that direction and capture any cards in its path for the player that interacted with it. When striking diagonally, the blast wrapped to the other side of the board, e.g. a block in the top-right position (5,1) pointing down-right will strike (1,2), (2,3), (3,4), and (4,5). However, the length of the strike depended on the offensive value of the interacting card.

Activated with Special Tiles, Offense Up is a sword tile. If a card was placed on this tile, its offense value was increased by 2-5x for the remainder of the game.

Activated with Special Tiles, Defense Up is a shield tile. If a card was placed on this tile, its defense values were increased by 2-5x for the remainder of the game.

Activated with Special Tiles, MAX Arrows! was eight-pointed star tile. If a card was placed on this tile, it was given all eight arrows for the remainder of the game. 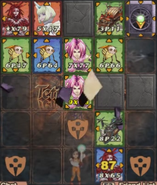 Rotating Block strike.
Add a photo to this gallery

The computer-controlled opponent's name and image were based on characters who appeared in Final Fantasy IX. These included major playable characters to minor NPCs.

Cards could be traded at the end of a game. Players could pick a single card from each player they victored over that was their color at the end of the round. If a player got a Perfect they took all the cards.

Players could buy and sell their cards to other players in the Card Shop. They could also buy card packs.

Players could auction off their cards to the highest bidder at the Auction.

Players could spend prize points to purchase cards at the Prize Center in ranking.

Players were ranked by their money and by VS. Ranking. The top-ranked player had their deck purchasable in the Card Shop by everyone.

The game contained an original soundtrack.

PlayOnline Cards.
Add a photo to this gallery

The Final Fantasy series
Retrieved from "https://finalfantasy.fandom.com/wiki/Tetra_Master_(PlayOnline)?oldid=3202331"
Community content is available under CC-BY-SA unless otherwise noted.