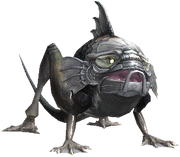 In Final Fantasy XIII-2, all Paradigm Pack Terraquatic monsters cast one of two Feral Links. Cleansing Overture always casts Dispel and Esuna on both allies and enemies. The effects of Refreshing Rain are always cast on allies, but otherwise vary from one monster to another. The effects always include some combination of healing, Esuna, Regen and Veil.

Their name is a portmanteau of "terra" and "aquatic", referring to them being aquatic creatures found on land. [view · edit · purge]"Terra" is the Latin word for "Earth". It is also present in some Latin-derived languages such as Italian and Portuguese.