A girl born with magical powers that were once thought lost to the world, Terra helps the Returners, acting as a bridge between the world of humans and espers.

Terra is a recruitable character in Final Fantasy Record Keeper. She can enter her Trance form upon execution of a Soul Break. She could be recruited in the Monster in the Lethe? and Touched by Magic Challenge Events, also appearing in Forgotten Bond and Prima Donna.

Terra is weighted as a Red Mage/Summoner hybrid as opposed to being a fighter, given that her magic stats far outpace her physical stats, a trait she shares with Ashe. Her Soul Breaks center on Black Magic with special emphasis on fire, wind, and non-elemental attacks. Her dominant element is fire, with the secondary one being wind. She is more durable than a typical mage given the right equipment, as unlike most mages, she can equip both swords and heavy armors, which can improve her poor physical stats that are typical of mages. Terra's Soul Breaks, including her Legend Materias, involve her transforming in her Esper form to deal damage with powerful fire or wind attacks, including techniques that involve a Magitek Armor, the theme of love, which was important for her character in Final Fantasy VI, and her half-Esper blood, and in two of them, Blood of Espers and Chaotic Inferno, she even opens the portal to the Esper World to summon her Esper father Maduin to help her. One of her Legend Materia can activate Trance and fully heal her if her HP drop to a dangerously low level, and Chaotic Inferno gives her Trance after using it.

Japanese event banner for "Monster in the Lethe?".

Global event banner for "Monster in the Lethe?".

Japanese event banner for "A Brush with Heroes".

Global event banner for "A Brush with Heroes". 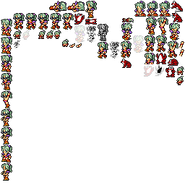