Terra's default player name is Nameless Girl, and her manikin counterpart has been renamed Fey Maiden.

Terra's default costume is "Magitek Knight", and is an updated version of her Yoshitaka Amano art. Her Trance form remains identical to its appearance in the PlayStation Portable Dissidia games. Its first alternate coloration resembles her "Narshean Princess" costume from Dissidia 012, recoloring her dress light blue and her cape yellow. The second alternate coloration recolors her dress pink and her cape purple, vaguely resembling Yoshitaka Amano's art of Krile Mayer Baldesion from Final Fantasy V

Her first alternate costume is "Benevolent Maiden", based on her deformed art

and her 16-bit sprite

. Terra has green hair from her "Emerald Locks" attire, and she wears a fuchsia sleeveless dress, pointed boots, and wrist guards, and pink shoulder pauldrons and sash around her waist. Her Trance form gains a green aura. The first alternate coloration colors her dress, boots and wrist guards white, her pauldrons gold, and her sash lilac with a striped pattern. The second alternate coloration colors her dress pink with a unique floral pattern, and her wrist guards, pauldrons, and boots rose. Her Trance form in this outfit is blue and green, based on her Trance form in her "Narshean Princess" outfit in Dissidia 012.

Her second alternate costume is "The Espers' Progeny", an updated version of her "Narshean Princess" appearance in Dissidia 012, based on a Yoshitaka Amano art. She has a pair of winglike ornaments on her top, to which her cape appears to fasten. The first alternate coloration recolors the sleeves of her top to a pale blue, the designs on the lower hem to dark blue, and the wing ornaments to silver, as well as adding blue tights with white spots. The second alternate coloration recolors the body of her top to a dark blue with more plentiful patterns, as well as adding white tights with green spots, a design taken from an alternate Amano art of her blue dress. 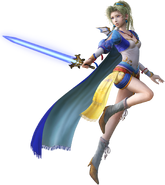 The Espers' Progeny I.

Terra's personality is reminiscent to how she was depicted near the end of Final Fantasy VI, exhibiting a more courageous and assertive attitude and willingness to fight. She is determined to save World B from destruction, and treasures the memories she has made with her companions during her time in the world. Her attitude towards Kefka also changes, refusing to forgive his past transgressions against her.

Terra equips swords as her main weapon. Her default weapon is the Enhancer, the sword she wields in her primary artwork by Yoshitaka Amano, and her signature weapon since the original Dissidia series. It was previously unnamed until the update for weapons was added. Similarly to the PSP games, Terra rarely uses her weapon in battle.

Terra's alternate weapons have unique and original designs for the Dissidia series. They can be equipped and wielded by Terra in the original Final Fantasy VI. The Rune Blade resembles a sabre and has an intricately detailed blade, a black handle and a swirl that stretches above the guard with dark roses in the center. Her second alternate weapon is the Crystal Sword, which has a purple handle and a crystalline spiked center, with the blade being the longest spike. Her third alternate weapon is Zantetsuken, the signature weapon of the recurring summon Odin. Its blade curves outwards with a smaller inward blade sticking out in the middle of the main blade, and its guard is spiked and the hilt features a furred pommel. Her fourth alternate weapon is the Ultima Weapon with glowing bright blue blade and a gold handle based on the sprite of the mobile/Steam ports of Final Fantasy VI.

Terra is summoned as a warrior of Materia to fight in the new war. At Materia's tower, Terra and the other champions are informed that they must fight each other to produce energy to sustain the existence of this world. After their meeting is interrupted by Spiritus, Materia orders her champions to fight his forces. Due to Materia's apparent lack of knowledge of them and of World B, Terra suggests seeking guidance from the resident espers to learn more about Materia and Spiritus. Squall attempts to separate from the group, but Terra convinces him to let her, Zidane, and Lightning accompany him.

While already en route to one of the summons, Terra senses another much closer, and the group decides to split up with Terra and Zidane pursuing the closer one. With the help of the moogles, the two discover Ramuh in the fields of a facsimile of Cornelia, and ask him for information on this new cycle. Ramuh imparts that both Materia and Spiritus are bound to this realm through the will of Cosmos to save it from destruction as the realm is threatened by the planesgorgers. Terra and Zidane resolve to fight for the world's survival, and Terra pleas with Ramuh to assist them. Terra and Zidane prove their strength to Ramuh and gain his summon crystal as their prize.

Following another lead, Terra and Zidane arrive in an illusion of Midgar, where they are ambushed by the Emperor who seeks to use the summons for his own purposes and asks which one they are looking for. The Emperor assaults them with the aid of Sephiroth. Terra battles Sephiroth, but is overpowered. She is saved by Kuja, whom she remembers from the previous cycles. The trio enters Trance to fight the Emperor and Sephiroth, but the battle is cut short when planesgorgers begin devouring the dimension. The three escape through a portal and Terra persuades Kuja to join them, expressing her desire to have a proper conversation with him. An overjoyed Terra thanks Kuja for freeing her from Kefka's control in the twelfth cycle, though Kuja feigns ignorance of the event.

As they enter Alexandria, Terra tries to communicate with Alexander, but he attacks them despite Terra's assurances they aren't going to harm him. After they prove their worth to Alexander, Kuja tells Terra and Zidane to leave as the planesgorgers start to destroy the area. Before Kuja departs, Terra tells him that she wants to see him again in the future. Reuniting with Lightning and Squall, the group encounters the Onion Knight, Vaan, and Y'shtola, and the two groups share their findings as they return to Materia's domain.

Once Materia and Spiritus come to a truce, Terra joins the rest of the champions to defeat Shinryu, the source of planesgorgers that threatens to eradicate the world. Before their staged battle to lure Shinryu out, Terra tells Kefka that, while they are currently aligned for common goals, she has not forgiven him for his past transgressions against her. During the fight, Terra and Y'shtola face off against the Cloud of Darkness and Ultimecia. Y'shtola uses her Aetherial Pulse to defend them against Cloud of Darkness's Particle Beam, and they brace themselves as they combine their powers into one powerful spell. Shantotto saves Terra and Y'shtola with her own spell. Once the battle energy summons Shinryu, Terra participates in a joint attack against the dragon, but is repelled as Shinryu reveals his true form in a potent burst of power. Once the warriors regain their composure, they work together to defeat Shinryu.

Shortly after killing Shinryu, the moogles give Terra a crystal to host her memories for Materia to use in the new cycles of wars. With a crystal doppelgänger of herself to serve on Materia's behalf, Terra is sent home.

Type: Marksman - Terra enters a charged state after a set amount of time passes without attacking or getting hit by attacks, during which her attacks are enhanced. The timer of her charged state will reset when she attacks.

Terra is a long-range magical fighter who will passively enter a charged state after not attacking or being attacked for a few seconds. When she enters her charged state the properties of her attacks change, giving her a wide variety of Bravery attacks for zoning, crowd control, combo set up, or self-defense. Broadly speaking, her uncharged attacks are faster but have lower priority and deal less damage, while her charged attacks are more powerful but slower and easier to block or dodge. Terra also has several means of area-of-effect attacks, including HP attacks, allowing her to deal damage to multiple opponents if they are in the right position. Terra is slow to move and her attacks are slow to execute and have lag to them, and some of them move on trajectories that cannot reliably hit opponents close to her, so she is reliant on keeping her distance.

Unused textures for Terra's Trance form exist in the game. One is a pale beige color with her forearms, lower legs, and the tips of her hair colored pink, and the other is a blue and green color. These correspond to the colors of Terra's EX Mode in her alternate outfits in Dissidia 012, with the beige and pink coloration seemingly an unfinished recreation of her Trance form in her "Emerald Locks" outfit. These textures are associated with Terra's 1-B and 1-C outfits, implying that at an earlier point in development each of her color variants would have had a uniquely colored Trance form as well. In the final product, Terra's Trance form is different colors in each of her outfits but does not change color between their color variations, and her two alternate outfits use blue and green, and green and yellow Trance forms, taken from her second alternate outfit and DLC outfit in Dissidia 012, respectively. The blue Trance form used for Terra's first alternate outfit is not exactly the same as the unused blue Trance form; the unused texture is a lighter shade of blue and colors Terra's lips blue, which the texture used in-game does not.

Terra with the Onion Knight and Warrior of Light. 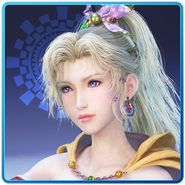 Terra alongside the other 14 main characters.

Unused texture of Terra's Trance form in her 1-B outfit.