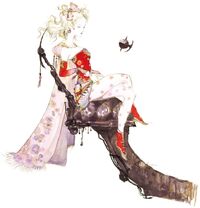 "Terra's Theme" (ティナのテーマ, Tina no Tēma?), also known as "Terra" or "Tina", is Terra Branford's theme and the main theme of Final Fantasy VI. It was composed by Nobuo Uematsu.

"Terra's Theme" is the overworld theme of the World of Balance. Being the main theme, it is reused for other themes of its soundtrack, including "Omen", the theme for the game's opening; "Awakening", which plays at Narshe when Terra regains consciousness from the control of the Gestahlian army, on the overworld map when she flees Figaro Castle with Edgar and Locke, at the Returner Hideout when she is asked to join the Returner cause, at Zozo, when Terra is awakened by Ramuh and when she later remembers her origins, and at Mobliz, both when Terra refrains from the fighting and later when she rejoins the party.

Its motif is included in "Save the Espers!", which plays at the Battle for the Frozen Esper, during the escape from the Magitek Research Facility, and during the battle with the Imperial Air Force; and in the game's "Ending Theme" from 7:46 to 8:20, and later at 16:46.

After completing their Death Game quest, Biggs and Wedge retreat to Aromatic Market of Yusnaan where during the night they play a rendition of "Terra's Theme".

This theme is included as the nineteenth track in Lightning Returns: Final Fantasy XIII: Original Soundtrack PLUS.

In one of the Letter from the Producer videos, Naoki Yoshida stated if there were enough player requests for this theme to be added in the game, he would include it somewhere that fits. The theme was then added to Patch 2.55 as the music that plays while riding the Magitek Armor and Gilded Magitek Armor mounts.

The theme is titled "Magiteknical Difficulties" in Before The Fall: Final Fantasy XIV Original Soundtrack.

The original version from Final Fantasy VI is included on the music player. The Memories of FFVI album it is the third track of is bought for 100 gil from JM Market in Taelpar Rest Area.

"Terra's Theme -arrange- (from FINAL FANTASY VI)" appears as part of the Memories of DISSIDIA FF album bought from Old Lestallum for 500 gil.

An arrangement of "Terra's Theme" by Takeharu Ishimoto titled "Terra's Theme -arrange- from FINAL FANTASY VI" is featured in Dissidia Final Fantasy as the background theme of the stage boards of the Destiny Odyssey VI storyline. It also plays during the cutscene where Terra monologues on how she may have forgotten something important when she awoke after the events of Destiny Odyssey III.

"Terra's Theme -arrange- from FINAL FANTASY VI" is reused as Terra's world map theme. "Omen" plays while performing a Data install and is heard at the beginning of Chapter 8.

"Terra's Theme" is a battle music track as both an arrangement and as the original SNES version.

"Terra's Theme" appears as a Field Music Sequence. It is available by default.

"Terra's Theme" is a playable Field Music Sequence that is available to the user by default.

A remixed version of "Terra's Theme" will play if when the Joyride ability is used with Magitek Armor, a reference to the opening sequence of Final Fantasy VI.

The opening theme of Final Fantasy VI is incorporated into "Terra" on the music album. Initially played in the key of G-minor the theme is transposed towards the end into A-minor, the most common key in which Terra's theme is played.

"時の放浪者 (Toki no Hōrōsha?, lit. Wanderer of Time)" is a vocal arrangement of "Terra's Theme", performed by Risa Ohki. It is sung in Japanese.

A remix of Terra's theme is included on this album, called "Tina" (new view snow remix), and is remixed by Snow Productions.

An orchestrated version of Terra's theme, called "Tina", performed by the Hollywood Symphony Orchestra, is included on the "best of" type tribute album to Nobuo Uematsu's music.

The Piano Collections version of "Terra" was remixed and included in the album by music duo Ante.

The song appears in the 8-bit arrangement album featuring tracks from several Square Enix games. It is the seventh track in the album.

The version of Terra's theme included in the concert album features a different orchestration arrangement to that of Grand Finale, produced by Nobuo Uematsu and Shirō Hamaguchi.

The 20020220 orchestral arrangement of "Terra" is included on this live recording of a concert performed by The World Festival Symphony Orchestra conducted by Arnie Roth at the Universal Amphitheatre in Los Angeles, California on May 16th, 2005.

The orchestral version of "Terra" from 20020220 was part of the performances of this concert tour throughout the USA in 2005. It was the third song of the line-up.

Performed by the Royal Stockholm Philharmonic Orchestra, this theme was included as an orchestral piece in the sequel to Distant Worlds: Music from Final Fantasy using the same arrangement from the 20020220 concert.

"Terra" is included on this live recording of an orchestral concert, performed by the Kanagawa Philharmonic Orchestra and conducted by Arnie Roth held in Tokyo, in November 2010. It is again the orchestral arrangement originally for the 20020220 concert.

The Piano Collections arrangement of "Terra's Theme" was included as the first track of this album.

"Terra"'s original version was released as the third track of this collection of themes present in the Dear Friends -Music from Final Fantasy- concert tour.

"Tina" is included on the second disc of this collector's edition set.