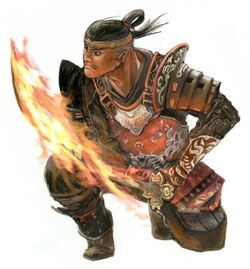 Tenzen (テンゼン, Tenzen?) is a non-playable character from Final Fantasy XI. He is a Hume Samurai from a nation in the Far East of Aradjiah. It is suspected that the symbol emblazoned on his kote is the flag of said nation. He accompanies your party in a series of quests in the Chains of Promathia expansion pack, where inevitably you are forced into combat against Tenzen himself. The player first encounters him in chapter 3. His Katana has the spirit of the Avatar Phoenix sealed within it.

This section about a character in Final Fantasy XI is empty or needs to be expanded. You can help the Final Fantasy Wiki by expanding it.

A skilled Samurai from an unknown nation to the Far East. His land is being overrun by the Emptiness, and he comes to Jeuno seeking help, as they are known to have harnessed the power of the Mothercrystals. Tenzen is also the guardian of Phoenix, as the avatar's spirit inhabits his sword. Every soul the sword claims serves to uphold Phoenix's lifeforce.

Thus, when people started falling prey to the Emptiness in Tenzen's homeland, they were sacrificed in Phoenix's name, which is a source of great doubt for him. He plays a major role in Chains of Promathia, as he initially tries to stop Selh'teus from spreading the Emptiness further. Having spoken with the remaining Terrestrial Avatars, he comes to believe that Prishe is the Keeper of the Apocalypse. Bahamut suggests that the Keeper should be sacrificed to stop the return of Promathia.

Therefore, Tenzen attempts to kill Prishe, but eventually repents, and helps the rest of the group defeat the Twilight God. Deeply moved by all he has witnessed, and still feeling guilt for his misguided actions, he then asks his teammates for forgiveness, before returning to his homeland.

A samurai named Tenzen is mentioned in the legend of the Four Lords, said to have turned to them for aid in driving a host of oni into the sea.

Tenzen appears in Pictlogica Final Fantasy as a playable character. His initial weapon is the Sakura.

[view · edit · purge]Tenzin is Tibetan name which means "defender of the faith" or more applicably, "upholder of the teachings". It's popularity derives it being the first name of the 14th Dalai Lama, Tenzin Gyatso.

This section about a character is empty or needs to be expanded. You can help the Final Fantasy Wiki by expanding it.
Final Fantasy XI characters
Retrieved from "https://finalfantasy.fandom.com/wiki/Tenzen_(Final_Fantasy_XI)?oldid=3236966"
Community content is available under CC-BY-SA unless otherwise noted.