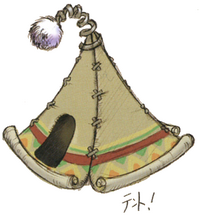 Restores HP and MP. If you ask a save moogle, he will restore everyone's HP and MP.

The Tent (テント, Tento?) is a recurring item from the series. In some games, the Tent completely restores the HP and MP of all allies, and in others, it only recovers a specific amount of HP and MP. Tents can usually be used on the world map and at Save points. As of Final Fantasy X and beyond, the Tent item has hardly appeared in games.

In some games, another item, called a Cottage, usually appears. In Final Fantasy XV, rather than being consumable items, camping is an integral gameplay mechanic.

Partially restores party's HP and MP. Can only be used outdoors.

Restores all allies' HP and MP. Can be used in the field.

The Tent can be bought from all stores, and can also be won or found throughout the game. It restores 1000 HP and 100 MP to the entire party.

Recover all members' HP and MP. Can be used outdoors.

Fully restores the entire party's HP and MP. Can be used outdoors.

Restores ally's max HP/MP. Use at Save Point.

Tent doesn't have any icon before its name. It can be bought in numerous towns across the various worlds for 10000 GP or found in chests. It only has 1 use, and also increases a Robot's HP by 9 when equipped on them. It acts like an inn, recovers all HP to all allies.

Tent recovers 100% of HP and MP of the entire party, but it can't be used during battle. It can be bought for 2000 GP on the Talon, Dwelg Town, Knaya, and Zhakal.

Tents are used in the Labyrinth mode. When the player chooses the EXIT card, they can create a tent to store accumulated gear to be retrieved at a later session. If the Geomancer card is in play, they can also retain any equipment marked with a cave symbol without losing them. Tents are marked by an orange symbol on the Labyrinth map.

Upon returning to the associated corridor, stored items will be retrieved upon selecting the Tent card. Only one tent can be placed at a time; any new tent created will replace the old one. Placing a tent will not affect any existing cottage.

The Tent is a healing item that can only be used in Quest Medleys. It allows the player to camp out in the field to fully restore their HP and adds a day to the count. It can be obtained randomly after completing a Music Stage.

Whenever the current party rests within a Record by expending Gems or Mythril, a Tent is deployed, restoring all HP and removing status ailments for all members. Any attached abilities are fully recharged, and the Roaming Warrior selected for the Record will have both of his/her summon charges restored.

A portable magic tent, a single night's rest in which can restore an entire party to full health and magic. An indispensable item for adventurers who spend extended time on the road, with nary an inn in sight. That said, it is not quite as restful as a night in bed, both for the thought that monsters may lurk outside, and hardness of the earth beneath one's sleeping bag. 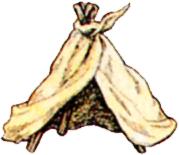 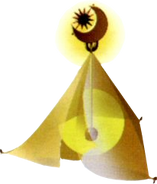 Tent used on the field in Final Fantasy IX.

A tent being used in Final Fantasy Dimensions at a save point.