Temple of the Ancients

Temple of the Ancients

Spirits of the Cetra

The Temple of the Ancients is a location in Final Fantasy VII, built by the Cetra thousands of years ago to house the Black Materia. The outside of the temple is similar in architecture to the Mayan pyramid of Kukulkan. The interior is a large maze-like cavern of staircases, and includes a passage where the party must avoid falling boulders, and a large clock the party must operate, walking across it to access the rooms its hands can point to. The mural room where the source of the Black Materia is stored shows paintings similar to the ancient Egypt, depicting the summoning of Ultimate Magic, Meteor.

The Keystone is required to open the temple's door. The temple lies on an island, and can only be reached via the Tiny Bronco. It can only be visited once, and is replaced by a crater on the world map.

The labyrinth was likely inspired by Relativity, a lithograph print by the Dutch artist M. C. Escher.

Cloud Strife and his party obtain the Keystone from Dio. Cait Sith turns out to be a double-agent for Shinra Electric Power Company and hands the Keystone to the Turks to grab the Black Materia before Sephiroth can.

Tseng, the leader of the Turks, enters the temple, but is attacked by Sephiroth who wounds Tseng and leaves him for dead. Cloud's party finds the temple surrounded by Sephiroth Clones and fights their way through until coming upon the room where the device to turn the temple into the Black Materia is kept.

Sephiroth appears in a ghostly form, telling the party about his plan to use the Black Materia to summon Meteor, and inflict an injury so deep to the planet the lifestream would concentrate its energy to heal it and he would merge with it to become a god. Sephiroth disappears, but the encounter triggers the Jenova cells inside Cloud to awaken him for the Reunion, and bring the Black Materia to Sephiroth.

Cloud's party escapes the temple as it turns into the Black Materia. Another Cait Sith, calling himself Cait Sith Number 2, comes up to rejoin the party. Cloud grabs the Black Materia, but Sephiroth returns and takes control of him, forcing Cloud to give up the materia and attack Aerith Gainsborough, but the remaining party member knocks him unconscious. In a dream vision, Aerith tells Cloud she is going to the Forgotten City to save the planet from Sephiroth. As Cloud comes to in Gongaga, she leaves.

The Temple of the Ancients is located to the South on Gaia's Eastern continent. 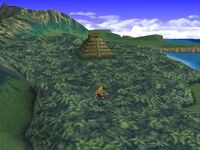 The path the player must follow begins as fairly linear. The first chest contains a Trident. The next exit has some sort of barrier. At the first opportunity, the player can go northeast and climb a wall of vines to a Mind Source and the exit to the Item Store, or go through the arches to the southwest reach a Turbo Ether. After taking the stairs down, followed by a short vine wall, the player will reach a chest containing a Rocket Punch. Continuing on that path will lead to a short climbable vine wall and another junction. The arch to the northeast leads behind the stairs next to a tall climbable vine wall. Found on the ground after climbing that wall is a Luck Plus Materia.

This room has an Ancient's spirit that acts as an inn, restoring MP, HP and removing status effects. The Ancient is also a save point and a basic item store. The chest in the room has the Silver Rifle.

Then name in the menu of the area is simply "Temple of the Ancients". The debug room refers to the area as "The Rock" (岩転がり, Iwa Korogari?, lit. Rolling Rock). The Final Fantasy VII Ultimania Omega titles the room 廊下 (Rōka?, lit. Corridor), though it labels the well of water as 知識の井戸 (Chishiki no Ido?, lit. Well of Knowledge).[1]

This room contains a path with hollow cylindrical rocks rolling towards the player. Each has a gap the player can stand in as the rock rolls over them safely. Halfway through this room is a pool with the Morph Materia on the ground in front of it. After reaching the end of the rolling boulders, a story sequence occurs, and when the player returns to the end, an Ancient that acts as a save point and inn awaits. The exit leads to the Void of Time.

Bottom of the Hole[]

The bottom has a chest with the Nail Bat, Cloud's joke weapon, after defeating the Ancient Dragons that attack upon landing in the room. The exit leads back to the Labyrinth. The mural on the wall depicts a dinosaur.

This room has 10 cave openings on 3 levels, with a locked gate at the top. After winning the short game of hide and seek with an Ancient (the player can enter the second door from the right on the middle level right away to catch it), the gate will unlock, and the Ancient will serve as an inn and save point. The chest at the bottom level contains a Work Glove, Tifa's joke weapon. The gate exits to the Mural Room.

This room has a plot progression segment followed by a boss battle with a Red Dragon. A Bahamut Materia drops after defeating the dragon, which the player needs to pick up or it will be permanently missed. A floating hologram of the temple is found at the end of the mural room, and examining it triggers the next story development. The murals on the wall depict the Meteor.

The maze is the start of the temple, where the player must follow the "spirit bodies" of the Cetra that were left in the temple aeons ago solely to protect it. The Ancients found here can heal HP/MP completely and prompt save. The first Ancient found also sells basic items.

A long room where "U" shaped boulders roll towards Cloud. Cloud must position himself to safety under the hollow part of the boulders. If he is crushed, the boulder will push him to the start of the room, where the player must start over. Once Cloud make it to the half way point, the screen will flash. If Cloud gets hit now, he will only be rolled until the halfway point. Once the player reaches the end of the room, the boulders will stop. The Morph Materia can be collected here.

Once getting past the room with the rolling boulders, the player will enter a circular room shaped like a huge clock, and the end of each number leads to a room. It is possible to move the hands of the clock, but only one at a time. The hand moved is respective to where the player starts; if Cloud came from a room connected through the minute hand, he'll move the hour hand, and vice-versa. By completing a full cycle, either clockwise or counterclockwise, the player can move the other hand as well.

The riddle of the clock is harder in the original Japanese version, because the player can't initially wind the clock. After being knocked off the clock three times, a flag is turned on which changes it to the version of the puzzle the player can control. This flag is always on in other versions of the game, so if the flag was turned off via hacking, the original version of the puzzle can be played on the other versions of the game as well.

If the player is knocked off the clock, they will fall into a room and have to face two Ancient Dragons in an attack from both sides. Upon completing the battle, they may access a treasure chest containing the Nail Bat. They must then navigate back to the clock puzzle to proceed.

About halfway through the maze, there is a room with a chest containing the Silver Rifle and also a little man which to talking twice with him can help the party out by restoring their health, and serving as a save point. He also has a small item shop.

Battles available after examine the device that turn the temple into the Black Materia.

Bottom of the Hole[]

The theme of the Temple of the Ancients is the "Forested Temple."

A remixed version plays as Cloud and Tifa's dungeon theme in Dissidia 012 Final Fantasy. This version is also in Final Fantasy XV playable in the music player. 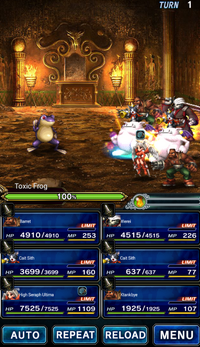 Sephiroth explains that during the times of the Ancients there were beings created by the planet that sealed their life energy in materia. It is suggested the creatures that protect the temple were created by the planet, and it could be assumed the Red Dragon turns itself into the Bahamut Materia upon defeat.[2]

The spirits protecting the temple have forgotten how to speak, but in an earlier version, the spirit in the room where the player can first buy items from it spoke with an accent that sounded like it was from a rural Japanese area, saying "welcome" and "come again."[2] It is also suggested Cid's Mop would have been obtainable from here, but in the final game it is dug up from Bone Village instead.[2]

The clock puzzle was harder in the original Japanese version, as instead of moving the minute hand the player had to "leave it up to the guard" and choose whether to move time backwards or forwards, then choose how much time should pass/revert. The challenge lied in memorizing the time interval each option corresponded to, as they did not point out the exact amount of time that would move. If the player stands on the hour or minute hand when the second hand moves across the one Cloud is standing on, the player will fall down the hole. In the original Japanese version falling three times would give the ability to move time precisely. In all later released, including Final Fantasy VII International, this second method is activated by default rendering the more difficult puzzle unused in these versions.

The weapon and armor Aeris has equipped at the end of Temple of the Ancients visit are lost. Her materia and accessory return to the player's inventory. The safer moment to unequip Aeris's unique weapon and armor is just before fighting Demons Gate. The last possible moment to de-equip her is actually after the boss battles, so the player can still equip her the best gear and swap them out before they are gone, however, the window of opportunity is narrow: it is possible to open the menu during the moment Cloud lunges at Aeris at the bottom of the pit (exactly after Aeris says "It's not your fault" to Cloud). 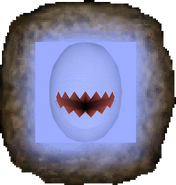 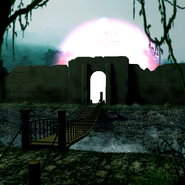 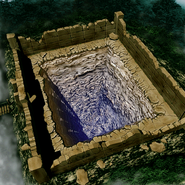 Temple grounds after the Temple's destruction.

Temple of the Ancients after its destruction.

The field model of the miniature version of the temple.

The miniature version of the temple as seen in the fourth disc of the International version.