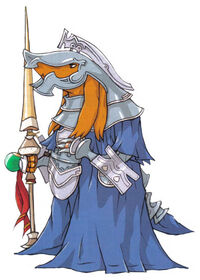 Templar (神殿騎士, Shindenkishi?, lit. Temple Knight or テンプルナイト, Tenpuru Naito?, lit. Temple Knight), abbreviated as TEM, is a recurring job class in the Final Fantasy series. The job originates from the Ivalice series, but has also appeared in spin-off titles.

Templars are knights who work close to their church, using a combination of physical weapons and magick. They tend to be stronger than other magick-using jobs since they can equip heavy armor, but they also have weaker magick stats compared to other magick jobs.

The Templar job is a physical class can also use status-inflicting spells. Among playable characters, it is exclusive to Beowulf Cadmus.

In the War of the Lions port, Aliste Rosenheim is also a Templar.

Templar (TEM) is a job available to bangaa. Templars are semi-magical bangaa that wield powerful spears and knightswords in combat. While the Attack growth is decent, Speed growth would have the player considering leveling up as a White Monk instead of a Templar. Using a Black Robe and the Dragoon's abilities can lead to massive elemental damage.

They can equip every type of armor, except "female" armor such as Minerva Plate and Rubber Suit.

Templar is a job exclusive to the bangaa. Templars wield knightswords and spears, and primarily have supporting abilities. Despite this, Templars make great attacking units.

The Templar appears on an ultimate card.

Edea and Ringabel as Templars in Bravely Default.

Agnès from Bravely Default as a Templar.

Tiz from Bravely Default as a Templar.

Edea from Bravely Default as a Templar.

Ringabel from Bravely Default as a Templar.

[view · edit · purge]Knights Templar were among the most wealthy and powerful of the Western Christian military orders and among the most prominent actors of the Christian finance. The organisation existed for nearly two centuries during the Middle Ages. Templar knights, in their distinctive white mantles with a red cross, were among the most skilled fighting units of the Crusades. They held great power throughout Europe before being forcibly dissolved through violence by Phillip IV of France in an attempt to attack the papacy. Pope Clement V tried to protect them, but failed. Nowadays, the Order of the Knights Templar is subject to numerous myths and legends.