A devout knight who defends the Church from heretics. Uses Spellblade techniques to strike down the enemy.

Templar, also known as Temple Knight, is a special job from Final Fantasy Tactics. It is Beowulf's default job, and is a mix of physical and magickal classes, using a sword to cast offensive magick. It is an extraordinarily powerful Mystic who needs a sword to access the abilities that target one unit instead of having area of effect, but with the benefit of lacking a charge time and with a higher hit rate.

The Runeblade gives a +2 Magick bonus and can be bought later. The Templar spellblade skills' animations are the same as the Mystic's abilities', with the exception of Vengeance, without the Shikigami in the beginning. It costs 4,340 JP to master.

In The War of the Lions, Beowulf's friend and rival Aliste is also a Templar.

Templar job command. Brings a magick sword strike down upon the foe.

Beowulf and Aliste must be equipped with a sword to use these abilities.

Spellblade's quotes were left disabled as dummied features, but the data exists within the game.

The Templar is one of the "special Knight" jobs, capable of using the Mystic's abilities as instant cast, giving it a potent arsenal of spells to cripple its opponents. Unlike other "special Knights'" abilities, the Templar's Spellblades cost MP and have a hit chance based on its magick attack and faith, as well the target's faith. Templar has the third strongest stat gains in the game (surpassed only by the Dragonkin and the Sword Saint); it is physically exceptional and magickally competent, and has high HP. Beowulf is the only playable Templar (should the player recruit him).

Its high magickal stats and MP makes it effective with job commands that focus on spellcasting, specially supportive. Time Magick, in particular, is useful for haste, to further enable the Templar and its allies, while White Magick can aid the team with healing when needed. It can be equipped with robes to increase its MP pool, as well the Summoner's Halve MP to reduce costs. The Templar can also make decent of use of Geomancy, as its damage is calculated on both physical and magickal attack.

To maximize Spellblade's success, it is recommended to boost magickal attack as much as possible. The Black Mage's Arcane Strength support ability increases attack by 33%, while the Bard's Magick Boost reaction ability grants +1 magick attack whenever taking damage. The Rune Blade, certain robes, and accessories can be equipped for their raw magick attack power increase.

Much like other jobs, the Templar can become virtually unkillable with the Shirahadori reaction ability from Samurai. While this won't protect it from magickal attacks, its access to Drain means it can regain lost HP easily. Drain is also a weakness of Lucavi bosses, doing 300-700+ damage while healing the user.

With its natural high speed and mobility, the Templar can easily close the gap and reach his opponents easily. The player can further enable it with movement abilities, such as its own Move +1, Thief's Move +2, Bard's Move +3, or even Teleport.

The Templar is one of the best jobs in the endgame for level grinding, as its Chicken ability can be used to cripple the last enemy while the rest of the party use abilities to accrue JP and EXP quickly, such Squire's Focus, or Monk's Chakra. 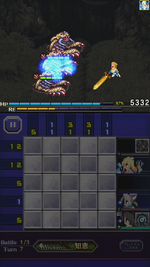 [view · edit · purge]Knights Templar were among the most wealthy and powerful of the Western Christian military orders and among the most prominent actors of the Christian finance. The organisation existed for nearly two centuries during the Middle Ages. Templar knights, in their distinctive white mantles with a red cross, were among the most skilled fighting units of the Crusades. They held great power throughout Europe before being forcibly dissolved through violence by Phillip IV of France in an attempt to attack the papacy. Pope Clement V tried to protect them, but failed. Nowadays, the Order of the Knights Templar is subject to numerous myths and legends.