The Hunters inadvertently discovered the Tempering Grounds some thirty years ago while on a separate expedition. Thought to have been constructed in the kingdom's incipient stages, these caves have long since fallen into ruin. None inhabit these halls but the souls of warriors who once served the line of Lucis and now eagerly await a new challenger.

Tempering Grounds is a cave with ruins inside found within the Taelpar Crag canyon in Cleigne region in Final Fantasy XV. It is explored in "Episode Gladiolus" DLC scenario.

Tempering Grounds are thought to date back to the kingdom of Lucis's early stages. Their ruins were discovered thirty years ago. In their deepest recesses awaits the Blademaster, Gilgamesh, who once served as the Shield of the Founder King. Many attempts were made to explore the ruins, but every expedition ended in failure and the deaths of everyone involved except for one man: Cor Leonis.

Gladiolus Amicitia, the sworn shield for Prince Noctis, the 113th successor to the Lucian throne, wishes to undertake the trial of Gilgamesh. Cor supports Gladiolus through the ruins but the former must take on the trials alone. They find past Lucian warriors whose bodies are reanimated by Gilgamesh, whom they refer to as their general. Gladiolus faces off against Gilgamesh and emerges victorious.

Gilgamesh recognizes Gladiolus as being worthy of being the Shield of the True King after seeing Gladiolus's only fear is that he should be too weak to protect Noctis. Gilgamesh reveals he had lost his arm to Cor, and yields Cor's katana, the Genji Blade, to Gladiolus. 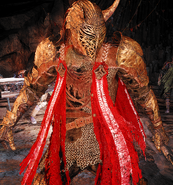