Warps party out of dungeon or out of battle.

Teleport (テレポ, Terepo?, lit. Telepo), also known as Exit, Warp, and Telepor, is a recurring spell or ability in the Final Fantasy series. Its effect varies, but it mostly enables parties to escape out of dungeons and battles. Teleport's effect overlaps slightly with another ability called Warp. When the two appear together, Teleport usually functions as a stronger version of Warp, teleporting the party directly out of a dungeon back to the overworld, while Warp teleports them to the previous floor within the dungeon.

Teleport (WARP on the NES and Warp1 in Final Fantasy Origins) is a level 5 Black Magic spell that teleports the party to the previous floor, at the point at which they exited that floor. The spell can be bought at Melmond and can be learned by the Black Wizard and Red Wizard classes. In the GBA/PSP/iOS releases it costs 5 MP to cast.

Banishes foes to another dimension or transports party out of dungeons.

Teleport is a White Magic spell. When used in battle, it attempts to teleport one or all enemies away from the battlefield, essentially defeating them. Its success rate increases with the spell's level. When used outside of battle the player party is teleported outside of the dungeon, appearing outside the entrance on the world map. However, the caster's HP is reduced to HP Critical levels.

The amount of HP left is equal to 1/(17 - spell level), so for example, the user would have 1/16 of their HP from casting a level 1 Teleport, 1/15 from level 2, and so on. This spell is ineffective in the Snow Cavern, Bafsk Sewers, the Dreadnought, the Coliseum, and Palamecia Castle due to the storyline at these locations. Any character can learn Teleport by having them use the Teleport Tome (Teleport Scroll in Final Fantasy Origins).

Teleport (Exit on the NES), it is a Level 3 White Magic spell bought in Northwest Saronia, Doga's Village, Falgabard, and Village of the Ancients for 1,500 gil.

It is used by the White Mage, Red Mage, Knight, Scholar, Devout, Sage, and Onion Knight jobs. In battle, it can be used to instantly KO enemies, and can be used through the items Ottershroom and Black Hole.

Warps party out of a dungeon or a battle.

Teleport is a White Magic spell, known by Cecil, Rosa, and Porom by default. It allows the party to escape from dungeons and random battles at the cost of 10 MP.

Teleport is learned by various characters, and costs 10 MP to cast. It warps the party out of dungeons.

Teleport (Telepo in Final Fantasy Anthology) is a Level 3 Time Magic spell used by the Time Mage job. It is found at the Castle of Bal and is bought in Phantom Village for 600 gil. The spell lets the party escape out of battles and exit out of dungeons. Using the spell in the Library of the Ancients in the merged world results in a glitch.

Teleport (Warp on the SNES) is an Effect spell learned from the espers Fenrir at a x10 rate and Carbuncle at a x2 rate, and in the Advance version, from Cactuar at a x20 rate, and Terra (level 26). It costs 20 MP to cast. A Teleport Stone is a one-use item with the same effect as the spell.

Teleport is an enemy skill used by Black Waltz 2. It deals minor damage.

The spell Teleport takes on many variations. There are nine Teleport spells total, three of which teleport the party to different areas in the past. A player can only be teleported if they have a corresponding crystal key item from the destination telepoint.

There are a number of other enchanted items that teleport the user to a specific location, such as the Olduum Ring.

Teleport is regarded as an exclusive ability and also a method of transportation. There are two types of teleportation, one which is used by undead enemy classes, such as the Ghosts, Reapers and Nightmares, to move about any spot of the area regardless of distance, while the other is via Gate Crystals and Teleport Stones, which allow the party to fast-travel between previously activated Gate Crystals.

Enemies that can teleport to different parts of the same area are invincible while doing so. Although, upon some time during teleportation (like when they teleport to another spot that is near to its previous spot) they may be targeted since their health bar remains visible. There exists a glitch where if an Etém is afflicted with both Disable and Confuse it will continuously teleport without pause. They cannot be killed, cannot be dispelled, and the status effects will not wear out, as they are paused while the enemy is teleporting.

Teleport is a spell only Ashe can use. The spell warps all Yarhi in Ashe's group to her exact location.

During the final battle, Ashe uses her Teleport ability to teleport Vaan and her away from Feolthanos's attack. Ashe's Teleport ability may work both ways: either teleport others to her, or teleporting herself and others near her to specific locations.

Teleport is an EP ability that allows Lightning to warp to a specific location on the world map. It cannot be used during battle. It is obtained after Lightning leaves Luxerion for the first time. Teleport cost 2 (easy) or 3 (normal/hard) EP to use. The warp points are unlocked as they are visited for the first time: Luxerion North Station, Luxerion South Station, Yusnaan Station, Wildlands Station, Jagd Village, Aryas Village, Wildlands Research Camp, Dead Dunes Station, Ruffian, and the Ultimate Lair (only if the player unlocks the extra day).

In the original version of the game, Teleport was an action that could be used to teleport to any aetheryte camp previously visited at the cost of anima. One could also spend anima to teleport from a camp to an Aetherial Node in its sub-region. It was also possible to set one's Home Point at an Aetheryte Crystal or Node to return there, particularly after being incapacitated.

Due to its slow regeneration rate, players often opted to not teleport to conserve Anima.

Teleport. Instead, teleportation now requires a small amount of gil. Teleport is obtained upon starting the game, formerly requiring the attunement of two aetherytes. The amount of gil required to teleport depends on the relative distance between aetherytes, sometimes costing more than 1,000 gil to teleport to faraway locations. Costs can be reduced with certain actions triggered by items as well as the Reduced Rates Company Action. A counterpart action, called

Return is also available. This allows the player characters to warp back to the aetheryte set as a home point for free, but has a long recast timer.

Despite being deprecated as a mechanic, in the game's lore, anima is still what is needed for successful teleportation, with adventurers such as the player character noted as being "replete with anima".

Noctis warps by throwing his weapon and appearing on the spot the weapon hits. He is the only party member able to warp. Noctis can warp to enemies or to predesignated spots on the battlefield. Warping consumes MP, and thus is disabled when in stasis or under the effect of the Wallbreaker Wave.

Warp instantly to destination tiles. May fail when attempting to travel to distant locations.

Teleport is a movement ability the Time Mage class learns for 600 JP. A unit with this ability can teleport anywhere within the battlefield, though chances of success decrease by 10% as the unit teleports farther from its original move range. Ghouls are also equipped with this ability.

Teleport is an auto-ability, which allows units to move to another tile within their movement range while disregarding height and any obstacles in the way. Even with Auto-Teleport, units cannot pass over empty spaces (where no tile exists), such as those in Muscadet.

Vampires and any characters equipped with the Fairy Shoes accessory have Auto-Teleport.

Ghost enemies and the Grenade can naturally teleport across the map, while the player may do so through the Faerie Shoes, allowing them to move to any location nearby. This is the only way to get behind the Demon Wall enemy.

Exit is a White Magic spell that teleports Benjamin to the world map when used outside of battle. If used in battle, it instantly kills foes, but no experience or GP will be earned. It can be used on certain bosses, such as the Stone Golem.

Teleport is an ability that has 30 uses, it also increases a Robot's HP by 9. The player will be able to teleport to any place that has already been visited. This ability can be used by Athtalot, Byak-Ko, C-Fisher, DemoLoad, Giant, GigaWorm, Jorgandr, Kirin, Lich, Mantis, Scarab, Susano-O , Sylph, Titania, and Unicorn.

Exit is a Black Magic spell that allows the party to escape from towers and caves, but also instantly kills a single enemy in battle. The spell automatically kill the enemy, but it doesn't reward the player any experience for their defeat. It cost 28 MP to use, and it can be bought for 8500 GP in Viper City (Future), Darius (Pureland) and Knaya (Pureland).

Warp is Noctis's unique EX Skill, allowing him to teleport to a thrown weapon. Charging the button will also increase its range. Uniquely, the EX Skill can be stacked up thrice, allowing him to use the skill three times in a row. Landing a successful hit with the Warp attack will give him a Warp-Crit buff that increases his attack power. Warping is also used in his HP attacks.

Teleport is an unlockable common EX Skill that warps the caster within close proximity of a target enemy.

Teleport is one of the final spells of the White Mage class, costing 3 SP to cast. It allows Choco to escape from the dungeon, and can also be used through the Teleport Wings item.

Teleport is a level 2 Time Magic in Bravely Default. It allows the player to escape from dungeons and battles. It is is not affected by reflect and will not work in certain battles or areas. It costs 20 MP to use. It can be bought in Florem for 400 pg. 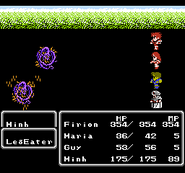 Warp cast on the field in Final Fantasy II (PSX).

Teleport cast on the field in Final Fantasy II (GBA).

Teleport cast on the field in Final Fantasy II (PSP).

Teleport on the map from Final Fantasy II (iPod). 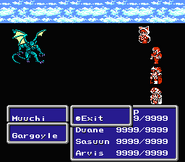 Teleport on the field in Final Fantasy III (Pixel Remaster). 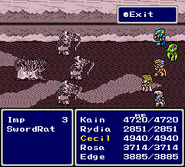 Teleport on the field in Final Fantasy IV (Pixel Remaster).

Teleport on the field in Final Fantasy V (Pixel Remaster).

Teleport on the field in Final Fantasy VI (Pixel Remaster). 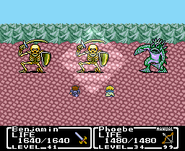 Exit cast on an enemy in Final Fantasy Mystic Quest. 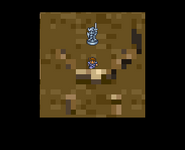 Exit cast on the field in Final Fantasy Mystic Quest. 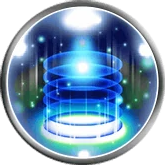 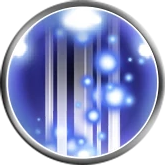