Transports party out of dungeons.

Telega (ダテレポ, Daterepo?, lit. Datelepo), also known as Exit, Teleport2, Warp2, and Master Teleporation is a recurring ability in the series. It is an upgraded form of Teleport that removes several targets from battle instantly. Usually, it is only available to enemies or Guest characters.

Exit (EXIT on the NES and Warp2 in Final Fantasy Origins) is a level 6 White Magic spell that warps the party out of a dungeon. The spell can be bought at Crescent Lake and can be learned by the White Wizard and Red Wizard job classes. In the GBA/PSP/iOS releases it costs 25 MP to cast.

Telega is a spell usable only by Demon Walls. It causes one character to be unusable for the remainder of the fight, gaining the status X-Zone. It can be used multiple times during the course of the fight.

Master Teleportation (Teleport2 on the PlayStation) is a movement ability exclusive to Messam Elmdore and Aliste. It allows the user to instantly teleport to any destination tiles rather than moving manually, this ability also lacks the failure rate of the original Teleport. Ultima is also able to use a form of teleportation that has no chance of failure.

Telega is an enemy ability, usable only by Demon Wall and Neukhia. It teleports one target in front of the enemy and inflicts Immobilize on that target. 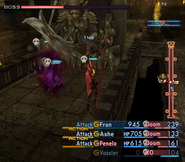