Techniques are special abilities usable by party members in Final Fantasy XV. They somewhat hearken to Limit Break systems from previous games in the series.

Using a Technique for the first time earns the Brother-in-Arms achievement/trophy.

Techniques can be used in battle by holding

and pressing the d-pad (when using the Type A control scheme). They require an available target and their use is mandated by the tech bar, a gauge that starts to fill when engaging a battle zone, and fills over time during battle. It is segmented into three, and the bar must first fill to either the first, second, or third to use a specific technique. The tech bar's fill rate can be upgraded via the Ascension Grid.

Each party member can equip a technique in the Gear menu, with one available by default and more able to be acquired from the Ascension Grid. Noctis does not have his own techniques, but can execute a follow-up attack after others use certain techniques. When using a technique, both Noctis and the party members involved are invulnerable to damage during its animation. Some 1- or 2-bar techniques (Tempest, Piercer, Dawnhammer, Cyclone, Libra Elementia, Starshell, Snapshot, Gravisphere, and Recoil) can be performed simultaneously, but the player won't be able to perform the follow-up attack to the prior technique.

Techniques gradually level up with repeated use; each time they do, their power and critical rate increase. Critical techniques, indicated by a yellow bar rather than a green one, deal critical hits and/or have strengthened effects. Some recipes will be favored by a party member, guaranteeing critical versions from them (or in Noctis's case, boosting the tech bar replenish rate). Guests' techniques can also be leveled up, but they cannot be changed, nor do they appear in the Ascension Grid.

Gladiolus's techniques damage enemies, and often break appendages, making them vulnerable to further harm. Ignis's techniques aid the player by healing, providing warp points, and bestowing elemental buffs. Prompto's techniques are ranged, from shooting through enemies from afar, to using flares to weaken enemies, to using his photography skills in battle (in addition to the photos he takes automatically).

When the ability to play as the other party members is unlocked, they gain the same techniques available to them in their respective DLC episodes. Like in the DLC, these techniques will never trigger critically. Noctis, Ignis, and Prompto have their tech bars fill even when not playing as them, while Gladiolus retains his vigor level when switching to another character, then back to him. All of these reset after a battle.

Royal Cleave can be used to knock down enemies to set up combo finishers and as part of a regular combo, useful for avoiding damage mid-combo. Apocalypsis is useful to unleash near a target. Dynastic Stance is good against groups of enemies, or when fighting Light-immune foes. Because the blades will often not fire when using finishing moves, it may be better to simply use regular combo attacks while under its effect.

Legacy of the Lucii performs a damaging combo and many of its hits deal area damage. The final swing is very powerful and often hits multiple times.

Along with Highwind, the player can again invoke Aranea to use Dragoon Dive indoors with the Technique command, costing 2 tech bars. Aranea downing enemies can set them up for Prompto to use his crackshot for critical damage.

Prompto can use Starshell, Selfie Shot, and Trigger Happy to almost the same degree as his regular Techniques, though Selfie Shot costs 2 bars, is always a selfie, and the photos are saved to manual-shots. Prompto gains the ability to use Trigger Happy after beating the episode once, essentially functioning as an always-critical version, firing a quick barrage of critical shots, with a unique strong explosive ending shot that can stagger groups of enemies.

The power of the storm surges through my blade!

Ignis has three Tactical Art techniques. High Jump acts similar to Aranea's Dragoon Dive at the cost of one tech bar. Ignis leaps towards his target (or straight down if there is none), dealing strong area damage which scales off the damage meter and breaks off enemy appendages, also granting AP for kills similar to Noctis's warp-strikes. He can still jump without a spear equipped. Overclock doubles the damage meter for a random element at the cost of two tech bars, able to reach 8.0 and also doubling its growth rate. A higher damage meter may visually intensify the elements. Using Overclock again overwrites the last buff.

While he acts as a guest party member, Ravus has a technique known as Last Rites, which costs one tech bar, in which he empowers his artificial arm with electricity and releases a Thunder-elemental AOE attack.

After beating the episode once, Ignis gains Quick Recipeh in the main game when he is in the lead, and after acquiring the necessary items from shops during subsequent playthroughs of the episode. Quick Recipeh allows Ignis to cook a meal mid-battle. Its result is random, yielding either a buff or a debuff with four possible outcomes. Both the buffs and debuffs wear off if switching away from Ignis.

Ifrit has three main attacks the player can invoke with the technique command: Firaga (one target, two tech bar segments), Flames of Rage (boost Ifrit's Strength and engulfs him in flames, two tech bar segments), and Meteor Strike (one target, three tech bar segments). He starts with Firaga, and the player can unlock the other techs from the Descension ability tree by collecting AP from felled foes. Upon being summoned via a technique, the battle arena will engulf in flames and glow orange, and he will remain to fight at Ardyn's side for roughly a minute. Ifrit can break through the guardians' barriers.

Close Encounter of the Terra Kind[]

Only one Technique is available: Sarah's Salvation, which is a sword attack against one target with a possible follow up from Noctis. It becomes available in the battle after meeting the Hiso Alien Elder and costs one tech bar to use. Upon initiating, unique artwork of Sarah is shown. When the player invokes the tech in the boss battle, Noctis will accidentally call Sarah either Gladiolus, Ignis, or Prompto, before correcting himself.

Many Techniques appear as command abilities.

This gallery is incomplete and requires abilities used by Aranea, Gladiolus, Ardyn, Ignis, and Cor added. You can help the Final Fantasy Wiki by uploading images. 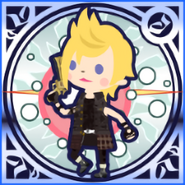 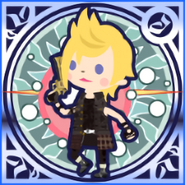 Some techniques appear as Soul Breaks.

This gallery is incomplete and requires Analyze added. You can help the Final Fantasy Wiki by uploading images.

Combining Overwhelm with Noctis's Bow of the Clever, used to give the crossbow an amazing fire-rate and damage, but the player was in danger of entering Danger state as it was easy to drain all of Noctis's health this way. The bow's fast firing rate during Overwhelm was nerfed in patch 1.16.

Prompto is the only one to use his Techniques against the player when fought as a training partner at camp: he uses Recoil, Gravisphere, and Starshell, although the latter has a different effect (inflicting Confuse). Gladiolus also uses Dawnhammer in the training room (in Parry and Rescue tutorials), Cor uses Lion's Roar when fought in Episode Gladiolus, Aranea frequently uses Highwind during her boss fights, and Ravus uses Last Rites when fought in Episode Ignis.

The "Prompto" who fights alongside Noctis in Chapter 11 at Eusciello is actually Ardyn in disguise. If the player invokes Techniques during this time, "Prompto" doesn't say the lines the real Prompto says, rather, he uses lines Prompto will use in Chapter 14. Starshell is an exception, but the player is unlikely to use it in this battle. It is not possible to use Snapshot at this time.