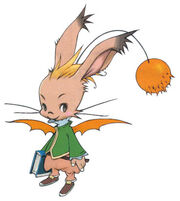 "Teach Me, Mont Blanc" (おしえて モンブラン, Oshiete Monburan?) is a song from Final Fantasy Tactics Advance, composed by Hitoshi Sakimoto. It was track number 15 on the Final Fantasy Tactics Advance: Original Soundtrack disc one and number 12 on disc two. The first time this song is played is when Marche Radiuju and Montblanc introduce themselves, right after the mission "Lizard Men!?".

Whenever this song plays, Montblanc is always on-screen. Shara's recruitment is one exception, which Montblanc has not appeared at the pub while Marche, Doned, nor Shara has ever mentioned him even once at the scene.

The environment also gives influence to this song. If it is at a crowded place (like a city or a pub), there will have a sound of people speaking, although the speaking cannot be heard clearly. If the song was played at the forest, there will be the sound of bird chirping.