The Tavnazian Archipelago is a region of Final Fantasy XI. This chain of tiny islands off the west coast of Quon was once home to the proud nation of Tavnazia. Before the Great War, this region was actually a peninsula connected with the mainland. However, a devastating explosion caused by a secret weapon of the beastmen resulted in the disintegration of a large portion of the surrounding landscape. The explosion also sent the nation's capitol, a city built on the profits of its thriving trade business, into ruin. The remnants of the beastman army remain in control of the archipelago. Until now, it was thought that none of the Tavnazian people had survived.

This region requires Chains of Promathia expansion to access. Players must complete "Chapter 1: Ancient Flames Beckon" before they may visit this forgotten archipelago. Several areas in this region require advancing to further points of the story in order to access them.

This is subject to Conquest. However, players may not use outpost teleportation until after "Chapter 4: The Cradles of Children Lost" is started, which is when the four nations first become aware of the Tavnazian Safehold's existence. 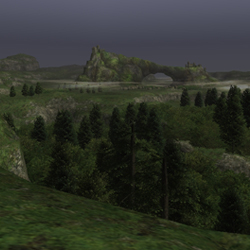 A field of peaceful meadows that are part of the eastern section of the Tavnazian Archipelago. The remnants of the Orcish army that sacked Tavnazia still prowl the wilderness. Other fauna include sheep, bees, and bomb clusters. This region's outpost is located in this area, just outside the safehold. 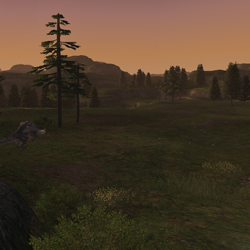 The western coastline of the archipelago. Despite its coastal nature, it is fairly rugged with a number of hills. On the far western side is Cape Riverne.

These expansive aqueducts are a fitting architectural achievement for Tavnazia, which was known as the "City of Water". Before the war, most of the city's major facilities drew their waters from the aqueducts, but now few canals remain.

The Phomiuna Aqueducts are connected to the underground sacrarium of the fallen cathedral. However, due to the powerful wards erected by a certain cardinal, the state of the sacrarium's interior is known to but a few. And there is also the question of the holy artifact said to be enshrined within the sacrarium's walls...

This area is accessed via the bottom level of the Tavnazian Safehold. Originally, this area was level capped at 40, making it challenging to even high-level players, but this restriction has since been lifted in a version update. The zone is notably inhabited by Fomors, among whom adventurers may find subligaria matching Zodiac constellations.

This area is part of the ruins of the Tavnazian Cathedral. A treacherous maze that changes each day makes infiltrating the inner sections of this zone tricky, especially due the undead prowling its halls. Like the Aqueducts, this place is notable for its fomorian inhabitants. Those in possession of a "Fomor Codex" may be able to lure out certain notorious monster versions of these shades.

This area is accessed via a doorway in Misareaux Coast, however they must reach part of Chapter 4 to option the key needed to open the door. Originally, this area was level capped at 50, making it challenging to even high-level players, but this restriction has since been lifted in a version update.

Situated on the far western tip of the main island of Tavnazia, Cape Riverne was once a peaceful meadow where one could gaze out into the Nosteau Ocean while resting in the soft breeze. However, during a recent earthquake, large chunks of the area were ripped from the ground and now float alongside the clouds above the churning sea. A Tavnazian expedition is currently investigating the area, working from only a few notes taken by Goblin explorers. It is divided into two areas:

This area makes up the northern half of Cape Riverne. Players must travel between suspended landmasses through Spatial Displacements.

Originally, this area was level capped at 50, making it challenging to even high-level players, but this restriction has since been lifted in a version update.

This area makes up the southern half of Cape Riverne. Players must travel between suspended landmasses through Spatial Displacements.

Originally, this area was level capped at 40, making it challenging to even high-level players, but this restriction has since been lifted in a version update.

A small mossy clearing located in Cape Riverne. However beauty, scenery, and blue skies are not all that waits for travelers within this seemingly serene cleft: this area is the entrance to multiple ENM battles, as well a quest and missions.