Tavnazia was the sister city to San d'Oria prior to the Crystal War in Final Fantasy XI. Players can witness the destruction of Tavnazia in the opening cutscene of the original game.

It was not until the Chains of Promathia expansion that players even came close to being able to see it. The closest they can get to the actual city is to stand on a bluff in Lufaise Meadows where the ruins of the city can be seen in the distance, often circled by the silhouettes of dragons, and overrun by the lush forests growing beneath the cliff.

The survivors of Tavnazia now take refuge in the Tavnazian Safehold. The safehold is hidden within a rocky ridge on the east edge of the Misareaux Coast and just across a pair of rope bridges from Lufaise Meadows. Here, amidst a winding set of caves exists a small community of survivors made safe in their seclusion. The major of the Tavnazian Safehold is the natural oculus into the caves, around which the city center is based. 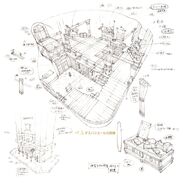