Yang Fang Leiden has a red tattoo on his shoulder.

Barret Wallace has a skull tattoo on his right shoulder. The earliest concept art shows a horned skull with "HEVEN" [sic] written under it. In the original Final Fantasy VII, Barret's tattoo is a skull with flames that resemble the shape of wings around it. The tattoo was altered for Final Fantasy VII: Advent Children and Barret has continued to appear with the new design as recently as in the Final Fantasy VII Remake. The new tattoo design has a rounder skull with extending wisps of flames.

for Final Fantasy VII G-Bike doesn't have the tattoo.

Red XIII has black patterns on his legs and what appears to be face paint. His "XIII" tattoo was placed on him by Professor Hojo, who tattoos his test subjects to keep track of them. In this vein, the Sephiroth-clones are said to have tattoos of numbers, but in the original game they are not actually seen in either artwork or in-game models. In Final Fantasy VII Remake the clones' tattoos are large black numbers. During his breakdown, Cloud Strife begs Hojo to tattoo him as well, to "give him a number". In a concept artwork for an older Red XIII and a cub, the cub has the same tattoo Red XIII has without out the XIII numeric. As Seto, Red XIII's father, also has the tattoo, it can be taken to be the symbol of their tribe.

On Don Corneo's artwork he has the word "Love" above a heart pierced by an arrow tattooed on the left side of his head. This is not on his character model in-game, however. Aps also has a similar tattoo in its artwork absent from its in-game model: a heart with a sword through it, bordered with the text "Colneo's[sic] Pet No. 002 (too small to read)", "son of a bitch", and "kill". 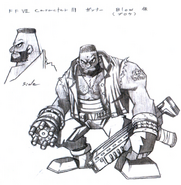 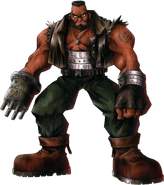 Artwork of Barret by Tetsuya Nomura.

Early concept art of Red XIII with a different tattoo. 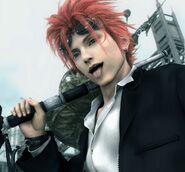 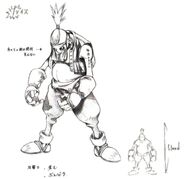 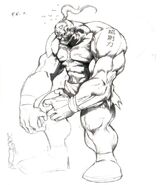 Zell Dincht has a black tribal tattoo on the left side of his face. The inspiration for Zell's tattoo came from a music video that featured a man with a full body tattoo resembling tribal origin and design. Mike Tyson also has a similar facial tattoo.

Sorceresses are associated with body modifications, and lines around their faces, which could be either tattoos or body paint or makeup. Sorceress Edea has white lines extending from the corner of her eye and cheek, but they appear to be makeup, as they are no longer visible when she dresses down. Sorceress Adel appears to have facial tattoos and a set of tattoos that delineate a mirror-image of wings on her back. In the fighting sequence the tattoo is replaced by an actual set wings. The first sorceress enemy fought during time compression has a similar facial tattoo or makeup to Adel and Ultimecia.

Ultimecia's body has numerous purple and blue patterns, but whether they are tattoos or body paint is unknown. Rather than having normal eyebrows, hers are either tattooed or painted on, and the patterns on her forehead and her hairstyle invoke the imagery of a devil's horns. This is also how she appears in the Dissidia Final Fantasy series. 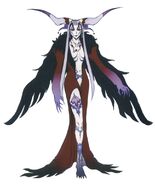 Amarant Coral has salamander tattoos on his shoulders. He doesn't appear to have them when he enters Trance and his appearance changes. Amarant is named Salamander in the Japanese version, a mythological reptile believed to be able to breathe and resist fire. Hence Amarant's moniker "Flaming Amarant" (or "Flaming Salamander"). 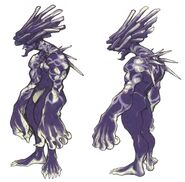 One of the character development system proposals for Final Fantasy X was a "tattoo system" where characters would have a 100x100 grid, and upon level up could place "tattoos" down to boost stats and learn abilities. Seymour's,[1] Jecht's and Brother's tattoos (which they still have in the final game) are a remnant of the this system where different tattoos would confer what abilities the bearer could use.[2]

Jecht has a large black tattoo of the Zanarkand Abes logo on his chest, the blitzball team he played for. Seymour Guado has two black tattoos of leonine creatures on his chest. Brother of the Al Bhed has large purple tattoos over his chest and arms. Letty has a red shoulder tattoo. 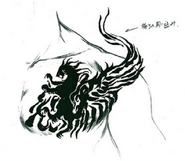 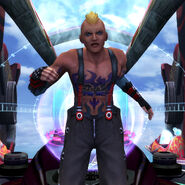 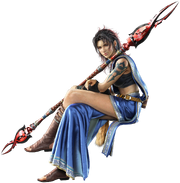 Lebreau has a purple butterfly tattoo on her shoulder-blade. Its wings fade to green. The player can get different colored versions of Lebreau's butterfly tattoo as adornments in Final Fantasy XIII-2 and Lightning Returns: Final Fantasy XIII, and equip them to Paradigm Pack monsters and Lightning. Gadot has a tribal tattoo that can also be obtained as adornment in the sequels.

Oerba Yun Fang has a a large black tattoo on her left shoulder that extends down her arm. It somewhat resembles the tip of her weapon, the Bladed Lance.

L'Cie also sport brands on their body that resemble tattoos, but are actually the symbol of the deity that branded them, Pulse or Lindzei. The deities' fal'Cie also often have the same brands on their bodies. The brand grows until it enters the final stage and the l'Cie transforms into a Cie'th. The l'Cie must thus complete their Focus within the time limit. The brand can be "burned out" under certain circumstances, turning white and static. A l'Cie whose brand has burned out keeps their power yet no longer needs to complete a Focus, and thus is no longer in danger of becoming a Cie'th. The l'Cie brand has proven to be a popular real life tattoo for many fans of the game.

A "burned out" l'Cie brand.

Angel of Valhalla is a white chocobo Lightning can save and ride on the Wildlands. In contrast to the White Chocobos of Final Fantasy XIII-2, the Angel of Valhalla has green feathers and a tattoo of Zantetsuken, Odin's weapon, above its left eye.

Some of Lightning's garbs feature her with tattoos. In the Dark Muse, she has a horse on her lower back (could be Odin), and one on her leg that looks like a barcode.

There exist legacy tattoos for people who played the game prior to its relaunch as A Realm Reborn. They are known as "Mark of the Twelve" or "Legacy Mark" and are only given to characters who were created in the original version of Final Fantasy XIV and who where transferred into A Realm Reborn. It can be hidden (or unhidden) with command "/lmark".

Tribal symbols across ribs are a part of certain gear. Y'shtola Rhul has a tattoo of the Circle of Knowing on her neck.

Gladiolus Amicitia has a large tattoo of a bird of prey that covers his entire back and extends down his arms. The full tattoo is not usually visible in the game, but could be seen on his model that Square Enix shared as a "fan kit". The Rugged Attire costume obtained from Episode Gladiolus lets the player play as a topless Gladiolus, showing the full tattoo. The tattoo is for the male line of the Amicitia, and is the credential of the King's Shield rather than a family crest, the family members getting their tattoo when they become one of the shield. Gladiolus's father Clarus Amicitia has the same tattoo, although it goes unseen.[3] According to the Final Fantasy XV: Episode Carbuncle Comic 13, one theory for the origin of the Shield of the King's bird tattoo is to honor Enkidu, a close companion of Gilgamesh, the first Shield of the King.[4]

The Final Fantasy XIV collaboration quest Adventurer from Another World gives Gladiolus a new attire that shows him with leg tattoos; however, he doesn't have the tattoos in his Assassin's Creed outfit.

David Auburnbrie is a quest-giver and a Hunter who has numerous tattoos.

Tattoos can be applied to player-created characters in the Comrades multiplayer expansion.

The Windows Edition adds details for Prompto's Casual Outfit, revealing his wrist tattoos on his left hand, covered by gloves in his other attires: a star and a stylized barbed wire. The tattoos only show when the quality is set to "Highest" or better.

Prompto Argentum has a code print on his wrist that he keeps concealed with a wristband. It is a mark of him being born as a clone for Niflheim's magitek infantry, and lets him open locked areas within the empire's magitek laboratories. After Prince Noctis and his friends save Prompto from the Zegnautus Keep, and they come across a locked room, Prompto reveals his origins to the others and uses the code to open the way. He is relieved to learn the others accept him regardless of his birth. The barcode on Prompto's wrist is visible while wearing the Kingsglaive attire with no jacket, and also features prominently in Episode Prompto where he learns of his origins.

Prompto's code print is also on the key card Noctis uses to get through Zegnautus Keep. 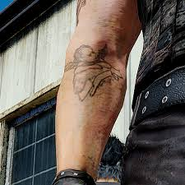 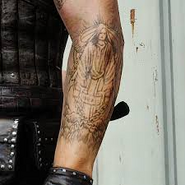 Nyx Ulric has small and subtle markings on his skin. He has a "crow's foot" on his right cheek, and a line and a dot under his left eye. He has markings on his ears, intersecting lines down his neck, a line down his middle finger of his left hand, and another down his forefinger on his right hand. He also has a line on his left forearm and right shin, and sets of intersecting lines over both shoulder blades.

Libertus Ostium has similar tattoos. They may be indicative of Galahd, the nation both hail from, or the Kingsglaive, the unit that employs them.

Emina Hanaharu has a red tattoo on her shoulder blade with an ornamental symbol and the numbers 9716 underneath. It can be viewed in the character viewer in Rubicus in her lingerie model.

Emina's tattoo is the brand of a Militesi spy, and everything about her is actually a front. Her original mission required her to infiltrate Rubrum to act as an assassin when called upon. However, her experiences at Akademeia caused her to give up her mission and the few Militesi officials who were aware of the plan deemed it a failure. She is eventually forced to leave Akademeia when she is discovered. Class Zero is tasked with spying on her. 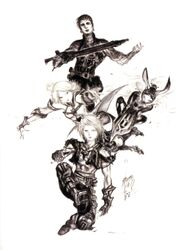 ). His outfit is black and gray and features a different shoulder design, which adds snake-like shoulder pads. In this outfit Vaan gains a tattoo on his left shoulder

The Blood-Sin is a tattoo of great power, as whoever bears it can control the Dark and the city of Leá Monde. It is the Valendian Rood symbol, but upside down. It is turned upside down as a representation of sin, the same way an inverted Christian cross is representative of evil and Satan.

Samantha also has red rose tattooed on her breast, as a coat of arms' symbol of the Order of the Crimson Blades.

Wol has a number of tattoos across his body, some of which can be seen while he assumes jobs with short sleeves and/or an open back.

Though acceptable in fictional works, tattoos hold degrees of stigma within modern day society. In Japanese society, in the past, tattoos were accepted and were adopted by the wealthy and samurai for featuring inspiring and mighty images. Controversy started at the Meiji Era, when tattoos were banned to "westernize" and "civilize" the nation. Currently the stigma of tattoos brings about the image of yakuza. Though there is a wider degree of acceptance of tattoos in the western world, tattoos hold a similar degree of social stigma if they are exposable on frequently open parts of the body. Tattoos are associated with rebelliousness and individuality, but are also stereotyped with gang relations and antisocial behavior.