Various
Tarutaru are one of the Enlightened Races in Final Fantasy XI. They have brownish button noses and chipmunk-like attributes and hail from the Federation of Windurst.

Although they resemble children in size, this does not reflect their age. Tarutaru seem to change their appearance little as they age, and while short in stature, they are proficient in magical ability, which they hone through determined study of the natural world. Tarutaru are said to understand the importance of the balance between natural harmony and magic and have produced some of the greatest mages in Vana'diel's history.

Their way of life that fueled the rapid reconstruction of Windurst following its destruction during the Crystal War.

The Tarutaru enjoy a friendly relationship with the Mithra, who live in Windurst as well after they were admitted to the nation by the Star Sibyl, the ruler of Windurst and moral leader of Vana'diel.

Most Tarutaru tend to speak with a language variation from the standard living creatures of Vana'diel. Many add "-taru" suffix to the end of many words ending with a "t", usually ending in consonants. Ending phrases with "-aru" is the Japanese stereotype for a Chinese accent.

They also like to make words rhyme. Professor Shantotto is known for her rhyming speech though this may be a sign of her "unique" personality. However, there are many Tarutaru who do not speak with this accent, notably the War Warlocks and the Star Sybil.

Tarutaru are noticeably smaller than the other enlightened races. They do not seem to noticeably age physically after they reach adulthood. Some Tarutaru are said to be as old as hume adults if not older and yet appear no older than those Tarutaru who just reached their prime.

Tarutaru have two genders and a natural gift for magic. They easily make the most potent and powerful spellcasters in the land. They possess a naturally high intelligence that manifests at an early age with many young Tarutaru having quite the grasp on vocabulary (see the Star Onion Brigade).

Tarutaru females are given a single name that ends in a rhyme, such as Apururu or Shantotto. Tarutaru males are given two rhyming names put together, such as Ajido-Marujido, or Zonpa-Zippa. 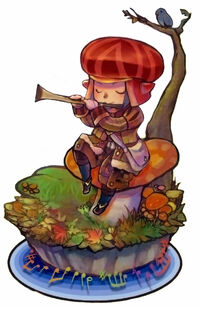 Tarutaru lack the physical strength and durability of their fellow enlightened races as a result of leaning towards magical study, but do control greater reserves of magical power (MP) as a result, and are the most studious of the races of Vana'diel—although not the most wise or spiritual; often being presented as heedless of caution.

Tarutaru tend to trust outsiders and are the only race that has reached some form of political settlement with the neighboring beastmen, the Yagudo.

Individual Tarutaru vary in personality, from the "wacky" Professor Shantotto, to the calm, almost poetic Star Sybil. Various other Tarutaru display trademark personalities like an incredible curiosity and a talent for mischief.

Tarutaru are the archetypal example of skill at Black Magic and White Magic, and they excel in the ancient art of summoning, although the combination of their vast magical power, precise spellcraft, lack of caution, and physical vulnerability has resulted in the death of many such Tarutaru Black Mages.

The Federation Forces of Windurst are led by a Warlock Warlord, chosen once a year from the Parliament of Patriarchs, and consist of twelve brigades of War Warlocks and four brigades of Mithra Mercenaries.

The following table shows the level 1 statistics for each class a Tarutaru can take, keeping in mind that the difference in attributes between each race is quite negligible, and any of them will be able to do any job competently as long as they are geared well: 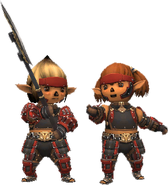 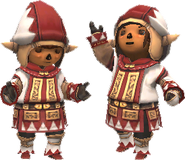 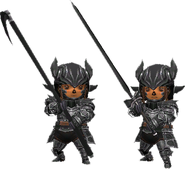 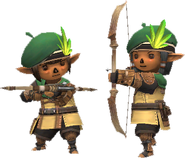 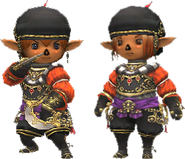 Shantotto, a prominent Tarutaru Black Mage, represents Final Fantasy XI, and plays as a special character, assumed to oppose Gabranth. She has little influence on the story, being an extra character as well as the only one appearing from Final Fantasy XI, appearing only once in the main storyline.

Shantotto reappears as a full-fledged Warrior of Cosmos.

Shantotto is a playable character.

Shantotto returns as a playable character.

The Tarutaru is one of the playable races.

A Tarutaru is a playable character.

Original concepts of the Tarutaru. 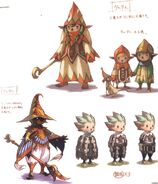 Concept art of the Tarutaru.