A Tantalus always gets what he sets his eyes on! That's our number one rule, remember!?

The Tantalus Theater Troupe is a traveling group of thieves led by Baku in Final Fantasy IX. They appear as performers and entertainers to cover their thieving, and put on shows as a distraction while they perform a job. The theater troupe, also referred to as the Tantalus Company, is famous throughout Lindblum, and many simply know them as performers.

The Tantalus Theater Troupe travels the Mist Continent on their airship, the M.S. Prima Vista.

The main members of the Troupe are:

Other members include the humanoids Benero and Zenero, two youngsters, Bunce and Lucella, as well as an entire band.

It is unknown how the group got started, but as Zidane is seen referring to Baku as his adoptive father, it can be speculated that Baku founded the group and took in orphaned boys whom he raised as the troupe's members.

Baku formed Tantalus 1771 when he was 16 years old and acquired the theater ship in 1790.[1] In January 1800,[1] the group intends to kidnap Princess Garnet on Regent Cid Fabool IX of Lindblum's request. While performing their version of the famous play I Want to be Your Canary for the princess's 16th birthday, their plan is to grab her and run while everyone is distracted by the play. Zidane and Blank make their way inside the Alexandria Castle amid a sword fight that, while part of the play, runs into the crowd allowing then to slip away. Zidane runs into the princess and discovers she wants to be kidnapped to escape the castle. Accepting her request, they try to leave quickly.

The captain of the Knights of Pluto, Adelbert Steiner, discovers Zidane fleeing with the princess and attempts to "rescue" her. He pursues Zidane and Garnet onto the Prima Vista where the trio end up storming the stage with the play still going on and need to ad lib their way through with Steiner unaware he has become part of the spectacle. In the turmoil the Prima Vista takes off, but as Queen Brahne realizes Garnet is trying to escape, she orders the theater ship shot down by a Bomb and it crashes into the Evil Forest. Everyone survives, but their theater days are on indefinite hiatus.

Zidane quits Tantalus and takes off with Steiner and the black mage Vivi Ornitier, who also ended up on the ship during the take off, to look for the princess who has been taken captive by the monsters of the forest. Blank is petrified alongside the forest while helping Zidane's group, but the rest of Tantalus escapes the Evil Forest, following a river outside before the forest petrifies, unfortunately having to leave Blank behind.

The group refuses to give up on Blank, researching a cure for petrifaction, which leads to the discovery of the Supersoft, owned by Doctor Tot in Treno. Marcus meets up with Princess Garnet and Steiner at South Gate, the two trying to return to Alexandria. Garnet feels culpable for what happened to Blank and wants to help. Marcus, Garnet and Steiner travel to Treno with the intention of stealing the cure, and meet up with Baku. Doctor Tot discovers catches them in the act, but happily hands over the Supersoft over to his former pupil: Princess Garnet. Marcus takes the remedy and accompanies Garnet and Steiner to Alexandria so he can reach Evil Forest from there, but Queen Brahne takes them all captive. Marcus is imprisoned in the castle dungeons with Steiner, but the two break free. Marcus lets the others save Garnet while he leaves for the Evil Forest and cures Blank.

After Kuja kills Queen Brahne the members of Tantalus return to Alexandria for Garnet's coronation. They cheer Zidane up when he is depressed, encouraging him to pursue his "canary", rather than returning to the group. After Baku incapacitates Eiko while wandering around Alexandria Castle, she asks him to deliver her love letter to Zidane. He drops the letter, however, and it is discovered by General Beatrix who mistakes it for a letter to her from Steiner. Marcus and Blank inadvertently scare away Zorn and Thorn while patrolling Alexandria, which leads the jesters joining Kuja in his Desert Palace.

After Kuja attacks Alexandria with Bahamut Garnet goes missing and Tantalus helps to search for her in Alexandria and Lindblum. Zidane finds her at her mother's memorial. As the troupe is based in Lindblum's Theater District, the members are often seen repairing their home after Queen Brahne's Battle of Lindblum. After Cid Fabool is turned into a frog and the party sets out to hunt for Kuja on the Blue Narciss, most of Tantalus remains in Lindblum busy in rebuilding of their home, but Blank leaves with the group, acting as their navigator.

After Kuja has been defeated and Zidane has gone missing, Tantalus returns to Alexandria to perform I Want to be your Canary for Queen Garnet, presumably for her birthday. During the play's climax the actor supposed to be Marcus casts away his cloak revealing a returning Zidane who reunites with Garnet.

The theme of Tantalus is "Tantalus' Theme". It plays in scenes involving Tantalus Theater Troupe, such as during the restoration of Lindblum.

The Tantalus theater troupe was primarily designed by the art director, Hideo Minaba. During development, there was talk of Ruby being an oyama (a male actor who plays female roles in Japanese Kabuki theater). The other Tantalus members' backgrounds were left a mystery, even during the character planning stages.[2]

The name Tantalus is mentioned in later Final Fantasy games: 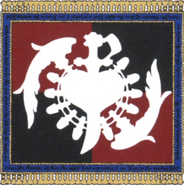 Concept art of the Tantalus emblem on a flag.

[view · edit · purge]Tantalus was a Greek king known for his attempt to hoodwink the Olympian gods. To test the omniscience of the gods, he had his own son cooked into a stew. The gods saw what the king had done after he served the stew to them, and reassembled the prince.

As punishment for his crimes, Tantalus was placed in the underworld, waist deep in water with a fruit bearing branch overhead. Whenever Tantalus bent down to drink, the water would recede, and whenever he reached to take the fruit, the branch would raise. This is also the origin of the word "tantalize".

Tantalus is also the name of a large cinder cone and associated volcanic crater in the Ko'olau Range overlooking Honolulu, Hawaii. Tantalus is one of the principal volcanic features and geological tourist attractions of the Honolulu area, along with Diamond Head, Koko Head, and Punchbowl Crater.