Dwarves are not beaten easily.

Tanks (戦車, Sensha?) are vehicles from Final Fantasy IV. They are the artillery of the dwarves in the Underground, who seem to favor using tanks instead of manufacturing airships. It is not specified why tanks, rather than airships, are the vehicle of choice for the dwarves. However, the intense heat of the Underground takes its toll on many of the airships that enter it, causing them to crash in some cases and otherwise limiting their range as a result of the lava rivers. Presumably this is why airships were forgone in favor of hardier tanks.

The tanks see action when the Red Wings attack the dwarves to seize the four Dark Crystals of the Underworld. When Cecil and his allies first enter the underground, they are caught in a battle between the tanks and the Red Wings, which damages the Enterprise. At the castle of King Giott, it is remarked that the tanks have successfully repelled the airship attack, suggesting they are more formidable than one would think. Giott later orders the tanks to attack the Tower of Babil, distracting them while Cecil and his allies infiltrate the tower. Dr. Lugae orders the Super Cannon to destroy the army, but Yang sacrifices himself to stop the cannon. Ultimately, although having proven themselves able to stand against the Red Wings in all-out war, the dwarves lose the Crystals one by one.

When the Giant of Babil attacks, Giott and Yang lead the tank corps to attack the giant alongside a Red Wings airship fleet commanded by Cid; this is done to create a diversion for Cecil's party to enter the Giant and destroy it from the inside. The plan succeeds and the Giant is destroyed. The last mention of the tanks occurs in the ending, where Giott commands the tank army scrapped so the parts may be used to rebuild the castle, as they will no longer be needed for war.

Despite this intent, the Tanks make a brief appearance in the Interlude, where they serve the game as walls by preventing the player from wandering too far from the Tower of Babil. It is unknown whether the tanks were deployed during the Second Battle of the Underworld. 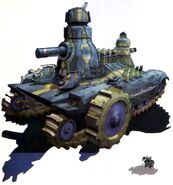 Art depicting a dwarf with a tank.

Tank in the SNES/PSX/GBA version.

Tank in the PSP version.

The tanks in the iOS version.
Final Fantasy IV setting
Community content is available under CC-BY-SA unless otherwise noted.
Advertisement