Merely a replica of a great hunter's weapon, this spear's offensive power is limited.

Taming Spear is a weapon for Kimahri, obtainable if the dominant ability on his spear is Capture.

Taming Pole is a weapon for Fang that has strong stats with "Stagger Lock". It is a popular choice for upgrading as Fang can spend most of her time leading as a Commando or Saboteur, and thus not be hindered by Stagger Lock.

Taming Pole is a Rank 4 weapon. It has minimum 23 Strength and Magic and 148 at max level. It has Stagger Lock as passive ability and is in the Gestalt synthesis group. It requires 54,800 EXP to fully upgrade. It can be bought from Gilgamesh, Inc. for 27,000 gil and found in Oerba. A fully leveled Taming Pole dismantles into 13 Begrimed Claws and a Cobaltite. Up upgrades into the Venus Gospel with a Uraninite.

Fang wields the Taming Pole in one of her sprites. 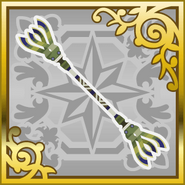 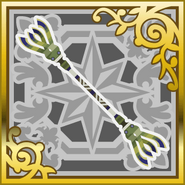 Taming Spear's Japanese name is Nimrod Pierce. Nimrod, king of Shinar, was, according to the Book of Genesis and Books of Chronicles, the son of Cush, the great-grandson of Noah. The Bible states that he was "a mighty hunter before the Lord [and] .... began to be mighty in the earth". Extra-biblical traditions associating him with the Tower of Babel led to his reputation as a king who was rebellious against God.