Potentially Disable monsters and make them much more likely to drop atmaliths once defeated. (If this ability kills a monster an atmalith will always drop.)

Tame (なだめる, Nadameru?), also known as Calm, is a recurring ability in the Final Fantasy series. It is usually available to the Beastmaster class.

Final Fantasy Tactics has a similar ability with a different Japanese name (調教, Chōkyō?, lit. Teach) belonging to the Orator.

Calm (also called Tame) is a level 1 ability for the Beastmaster class. It is learned after gaining 10 ABP. It attempts to inflict Stop on a creature-type enemy. It only works against monsters and misses against humans/mechanical enemies. In the GBA version, Calm is bugged and will only work on non-creature enemies (including Omega).

Tame is available to Beastmasters starting at level 30 and has a recast time of 10 minutes. The ability, when used, will greatly reduce the total enmity one creatures has versus a Beastmaster, possibly eliminating it. If the enmity is eliminated, then the creature will go back to its normal routine and stop attacking the player.

The /soothe emote is used in Resolve Guildleves on enemies that have been reduced to low HP in order to inflict a special form of Pacification on them. Unlike normal Pacification, this special Pacification has a different icon, Japanese translation (懐柔状態, Kaijū Joutai?, lit. placation state), and effect, causing the monster to stop attacking entirely so that it may be captured.

Calm is an 8 CP special ability. During Field Music Sequences, first Bad or worse on a Trigger will not decrease chocobo speed.

Calm is a reactive ability that costs 6 CP to equip. It is activated just once in Field Music Sequences (FMS) if the player receives BAD or worse on a Trigger while riding a chocobo. It skirts damage and maintains speed. It is learned by Kain (level 10), Bartz (level 35), Krile (level 35), Yuna (default), Aphmau (default), Rikku (level 20), and Ace (default).

Tame is the unique ability of the Beastmaster job. It is a Strike elemental physical attack, a power of 55 and a cooldown time of 15.0 seconds, and has a chance of adding the disable status to the target. If the target is killed by Tame, it will drop an atmalith. This atmalith will be available for all players in multiplayer, unlike regular atmalith drops which can be normal loot for other players. Adding the Death mutation can make it easier to gather atmaliths. 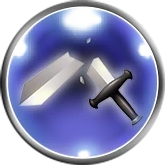 A tame animal is an animal that is relatively tolerant of human presence. Tameness is the quality of an animal being welcoming towards the presence of humans, either naturally (as in the case, for example, of island tameness) or due to human intervention (as the result of animal training).