Tama is featured with Serafie on the image for Lann & Reynn's armor Mirage Accessories.

Tama appears as a character.

Tama makes an appearance in Kingdom Hearts Union χ[Cross] as an obtainable headgear as well as a Magic (blue) medal. 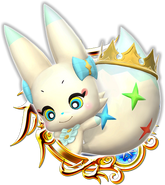