Final Fantasy Wiki
Register
Don't have an account?
Sign In
Advertisement
in: Characters in World of Final Fantasy, Main characters

Lann and Reynn's trusty navigator. She's not a bunny rabbit, in case there's any confusion there. Claims to smell like rainbows. As it turns out, there's no way to prove her wrong.

Tama is Lann and Reynn's travel companion and a playable Mirage in World of Final Fantasy.

Tama is a small, fox-like Mirage with white fur and yellow and turquoise eyes with a light red dot in the corner of thick black lashes. She has a turquoise bib, a small light blue nose, small pink cheeks, and light blue tips on her large ears, small arms and feet, and tail. She wears a turquoise bow on both sides of her head beneath her ears and her large tail is adorned with a gold crown and eight four-point stars, each one a different color (red, orange, green, turquoise, light blue, blue, purple, pink).

You.. You... You... How dare you call me the-stinky again! That is the last the-straw! I am the-fragrant! Roses line up just to get the-one whiff of me! What really the-stinks is your whole stupid existence!

Tama is a talkative Mirage with a perky disposition. She has a speech quirk where she often says "the" in the front or middle of a word, sometimes multiple times in a single sentence. (In Japanese, she ends her sentences with na no desu ("It is so"). She appears to use the term randomly, with no set pattern. Some international language subtitles have varying versions of the quirk: in French, she ends her sentences in voilà! ("See there!"); in German, she ends them with jawohl ("Yes."). She has no speech quirks in the Spanish version.) Like Reynn, Tama is often exasperated by Lann's dimwitted tendencies. Tama hates it when someone makes negative remarks about the way she smells, Lann in particular.

Age: Immeasurable
(Due to her alternate interpretation of time)

Notes: Navigator / Talks the-funny / Floats / Rides on people's heads / A little girl at heart / Knows how to run with a joke / Pure and innocent

Sphere of Influence
Tama maintains an extremely high number of thresholds, and commands a large repertoire of talents, likely due to the sheer number of things she's learned in the innumerable places she's traveled. However, depending on the world she visits, she must limit her talents to a smaller subset. For example, in Grymoire, Tama can help Lann and Reynn out by negating their deaths or failures (through microreversals of time) or control space (as with Gate travel). She is required to pay for these actions in lives (or souls), but all the same her powers rival that of a god's. No wonder she's prevented from using them all at once.

Relationship with Enna Kros
Tama has known Enna Kros since before she became a god. She possesses far vaster powers than her small stature suggests.

Tamamohimé
This is just one wondrous, intense manifestation of the hidden power Tama has accrued during her lengthy existence. Tamamohimé can recover all nine of her lives in less than a day. By borrowing The Girl Who Forgot Her Name's power over time and fantasy, she can produce with ease miracles far beyond her normal capabilities. And because all of her lives are restored to her each day, she can sacrifice them with near impunity. Calling her some kind of super-hacker wouldn't be off base; she's more like a deity than a Mirage. Lann and Reynn could never imprism her against her will.

Tama sits on top of Lann's head when he wakes from a nap and heads to his job. She is noticed by Lann's older twin sister Reynn, who doesn't tell him about her presence. After Enna Kros appears and tells the twins they have always been alone in the world, Tama reveals herself and is asked to explain the rest of the story.

In Nine Bean Coffee, Tama explains to the twins that they were Mirage Keepers and that the marks on their arms allowed them to command legions of Mirages. Tama goes on to mention that they also controlled the Pleiad, meaning that they could have ruled the world had they wanted it. When asked about where she got her information, Tama mentions that Enna Kros had told her about it. Realizing that the twins remain unconvinced by her story, she presents them with her prismarium and initiates a battle to teach them about their abilities. After the battle's end, she exclaims that the duo used to be unstoppable. Tama ponders aloud to Enna Kros about the twins' memory loss and the effects of being spliced out of Grymoire, explaining that they lost all of their memories about Mirages but still retained their other memories.

After Lann sacrifices himself to defeat Brandelis, Tama escorts Reynn back to their Nine Wood Hills and watches her spiral into a crippling depression over the loss of her brother. Unable to stomach Reynn's sadness, Tama transforms into Tamamohimé and offers Reynn the option of turning back the clock on the situation in order to prevent Lann's sacrifice. Unaware that the giant fox that stood before her was Tama, Reynn agreed to the proposition and Tama offered up all of her nine lives. The Girl Who Forgot Her Name accepts Tama's nine lives as payment for rewinding the timeline, ultimately erasing Tama's existence and her role in Reynn and Lann's journey, with Serafie taking her place.

The party later discovers that the Girl Who Forgot Her Name is a Keeper of Time and can restore Tama with the lives of another kyubi like Tama from the same tribe. They hunt and defeat a black fox in Saronia, claiming its lives. Upon returning with only the kyubi's souls, the Girl calls not having the kyubi itself a little unorthodox, but says they can use one of the two souls to spin a new thread, allowing Tama to have a life to spare. Time itself again changes, restoring Tama. Reynn finds herself really happy to see Tama, but otherwise is unaware of the change in the timeline. Back in the tearoom, Serafie asks the Girl to not make her "fill in for that lazy Tama anymore." Afterwards, if the player speaks with Tama in Plaza 99 of Nine Wood Hills, she will state that she feels like she missed Reynn and Lann, though this doesn't make sense.

In the end, the spirits of Reynn and Lann, departing Grymoire, tell Tamamohimé to take care of the world once they're gone. "And thank you, for everything." Tamamohimé resumes her form as Tama.

Tama serves as Lann and Reynn's guide and navigator in World of Final Fantasy, and is also a playable Mirage in battle. She allows the twins to fast-travel between Nine Wood Hills and Grymoire using Gates, and should the player's party fall in battle, allows them to be sent back to Nine Wood Hills without losing items, EXP or gil (excluding battles with thresholds, which result in a Game Over). In addition, Tama grants any Mirages that have unlocked all of the spaces of their Mirage Board with a star (certifying them as "Master Mirages") and a permanent stat bonus or bonus ability of the player's choice.

Images of Tama appear in the minigames Sandstalker, Whack-a-Cactuar and Einhänder Invasion in the commencing, victory, and losing result screens. She also appears on the Game Over screen.

Tama joins the player's party during the Prologue, and has the Libra and Foxfire spaces already unlocked on her Mirage Board. She remains in the player's party until several points in the story: in Chapter 14, "Lost Powers", where the player temporarily loses access to all their Mirages (including Tama), and near the end of Chapter 21, "Chaos in Grymoire" , where she leaves the party and is not recruitable until after completing several story-related quests in the Postscript, "Turn Those Corners Up".

Tama can be fought as an enemy in the Maxima version, after clearing the Postscript. She can be fought alongside Enna Kros and Serafie in a superboss battle at Nine Bean Coffee, and can also be fought at The Coliseum alongside Serafie and both their transfigured forms.

Tama: The-weird... I feel like I've missed you but that doesn't the-make sense.
Lann: Well, it's kind of a long story.
Tama: You...don't think you could the-maybe elaborate?
In Plaza 99, after reviving Tama

Tama's Japanese voice actor, Ayana Taketatsu, performs the song for the game's bad ending sequence, "Silent World", and is also one of three performers along with the Japanese voices of Enna Kros and Serafie for the good ending theme "World Parade."

In May 2017, Tama appeared as a part of the Final Fantasy Static Arts Mini line.[1]

Tama with Lann and Reynn.

Tama as she appears in the Mirage Manual. 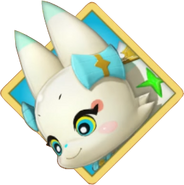 Tama is "ball", "jewel" or "pearl" in Japanese, and it may refer to the hoshi no tama (ほしのたま?, lit. star balls), magical jewels or balls carried by kitsune, sometimes represented as a container to hold a portion of its magical power when changing shape, or a representation of the kitsune's soul.

Tamamohimé may refer to the legendary fox spirit, Tamamo-no-Mae, as seen in how the form resembles a nine-tailed fox.