Gilgamesh: Enough expository banter!
This talk page is used for discussing improvements to the page "Rydia". It is not the place for general discussion or sharing stories about the topic of this article.

I thought it was the other way round, because it's pretty obvious Edge has feelings for her. Rydia just usually seems to ignore poor Edge. Diablocon 10:53, 6 April 2007 (UTC)

Not only cute, but its the only way it can be not creepy: Out of all the main characters who matter at the end, Edge is the only one who hadnt known rydia as a young child. While I always wanted her to get with Kain, and thus spawn Dragon-Summoning Dragoons with which to take over the world. But that would be very creepy. 74.128.56.194 00:04, June 5, 2011 (UTC)

Hey, but I think you should check back the reference you mentioned above. I was really happy when you said she had 'vague affections' for him. But could you please confirm that by showing the reference? The last time I checked, it said Edge was the one who had feelings for her, in the settei siryou, i mean. Please correct me if I'm wrong, I really want to know if she has feelings for him. 18:11, 29 November 2009

i think that at the end of final fantasy 4 that edges adviser person told edge not to chase after that girl he likes scince rosa and cecil are married it has to be rydia Yuffiesboyfreind 18:19, December 20, 2011 (UTC)

Hey, is there a way to list the special items they receive in the GBA version to allow them to change their commands? I know the Mist Ring has the Mist Dragon give everyone the Blink effect. I saw you mention about the "Harmonius Ring" in Edward's profile. I also saw the "Twin Stars" sometimes allows Palom and Porom to cast W-Meteo(Meteor) through their twin command. Dunno bout the others, though.
--Chris 00:04, 7 April 2007 (UTC)

Taken from the game script: Rydia: The Feymarch - the place they call home. I livded among them and befriended them. I can't use white magic anymore, but my summoning and black magic have grown stronger. Time flows differently in the Feymarch, though...

Rosa: So that's why you've grown so much?

She doesn't say explicitly but I think it is made clear that it has to do with a different flow of time. She appears different because time flows different. Since she grew up, it means time flows faster. The page for Feymarch says the same thing too.

Actually, I think thats the whole reason Edge likes her. Edge seems to be quite used to being overly assertive and getting his way, while also being protected from consequences. So when Rydia slaps him down verbally, he rarely responds but does comply -- clearly, this is new for him. Given the personality, it wouldnt surprise me one bit that the girls at home were just as eager to please him as everyone else in Eblan. Compare that to rydia who simply doesnt seem to give in to his wants, who isnt wholly submissive to him, and who doesnt care much about his Prince title. Edge seems like the type to go for that -- well, actually of course we all know he's sexy and gay, but still it fits in the genreal model...(Yes, yes he is. No one who calls themselves a ninja while wearing purple pastels could be straight.) 74.128.56.194 00:13, June 5, 2011 (UTC)

I remember having a few debates about this with a friend years ago. His impression was that regardless of how she looks, her mentality would probably be the same. The increase in age had nothing to do with "fan service" because back then stuff like that didn't impact sales. (pity it's changed...) Time flowed faster there, making her age physically, not mentally. Listen to Rydia talk after she rejoins you, she still sounds like she's a child. One possibility why she doesn't look much older in the sequel is because Summoners age different to normal Humans (or whatever they are), or it could also be that she didn't age physically until time had caught up to her. Some people also just naturally age well.--68.6.238.12 08:09, March 5, 2011 (UTC)

Where do the weight measurements come from?

I am American so lets forget about m&kg just for the sake of conversation.

Even if she were incredibly small this would put her somewhere near the 4th percentile for 7 year olds. If there is some form of documentation indicating that all characters are abnormally small in FFIV then I have not read it before. Also while it is possible, I have never heard that Rydia was not a humanoid of standard proportions. The callers of Mist appear to be a tribe rather than a new species, so I don't see why she would be so small.

Not unless it's stated in one of the Ultimania guides. None of the games ever mention a specific age. As for her aging (or lack thereof), maybe she doesn't age now because something about being in the Feymarch messed up her natural aging? Or maybe Square just didn't want to ruin her appeal as fan service. - RadLink5

Fourteen-year old fanservice is only slightly less creepy though. Also she was already fan service to most people. - RadLink5

Rosa doesn't look like she's in her 30s either, nor do Cecil and Edge. Actual extra time passed in the Feymarch. Unless you can demonstrate that her aging is actually somehow slowed from her time in the Feymarch, there's nothing to this.Ryushikaze 23:20, 13 February 2009 (UTC)

It really is a shame they had to keep changing her design around. It's been one of the reasons I just couldn't come to like the newer versions/sequels as much. I wish these games didn't rely so heavily on fanservice. Rydia seemed to wear more clothing in the earlier versions as opposed to the latest remake and the sequel. It's kinda like how impractical Rosa's outfits became, especially as a mage. I realize that's not quite on the subject of aging. I always had the impresion she was simply teenaged looking in the game when she got older (physically), but when you stop to think about it.. just cause she's older looking doesn't mean she's actually older age-wise. Anyone remember Emeralda from Xenogears? She jumps from child to adult in a very similar fashion (although I believe it was related to nanobots in that), but she's still a child because there's been no "passage of years" as it were. I really don't think Rydia's as old as some people are assuming she is. Then again, the nice thing about sprites back in the day was that they could reflect a variety of ages.--68.6.238.12 08:16, March 5, 2011 (UTC)

Sadly I can't find any forthcoming information on what White spells Rydia learns when in the original and DS releases, because she learns more spells at different levels in the DS release. Can someone who knows this information add it to the article? Drake Clawfang 22:04, 15 June 2009 (UTC)

Thank you for providing useless advice to a problem that has already been solved. Drake Clawfang 13:47, 11 July 2009 (UTC)

Yes, all girls could until the DS remake. Jeffrey o

OK. Can some please tell me what her age is because it driving me nuts! I know she 7 years old, but!

She lived for several years in a place where time goes faster. She's not 7 in that form. Bluestarultor

I wish you guys wouldn't stubbornly insist on using the Amano art as her portrait. Let face it, it's appalling. Can't we use DS artwork for everyone and then Amano for Cid, Fusoya and Tellah since they don't have DS renders?

I know that means losing uniformity in all the pages but the core character's pages will look the same (and better).

No. Your motives are based on personal appreciation of the images, while the current state bases itself on consistency. It is also a standard to use artwork rather than CG images. - Henryacores^ 10:57, May 9, 2011 (UTC)

In the gallery at the bottom of her page, there's a pic of Rydia and "Mist Dragon". However, there is lot's of water, the dragon has a serpentine body and no wings. Wouldn't it have to be Leviathan, King of the Eidolons? Sure, it'd make more sense if it was Mist Dragon, but Leviathan makes sense too since he is not only the king of the place the made her age to an adult (which is how she appears in the pic), but the guy that took her there in the first place. WestleyCole 16:11, May 20, 2011 (UTC)

Normally, your eyes would be able to discern such simple things, but the DS doesn't like to make things so simple.

This is a picture of the Mist Dragon. 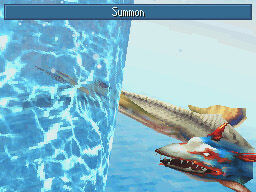 This is a picture of Leviathan.

I will be honest about the similarities and even point out that the Mist Dragon "breathes" his attack like in the video where as I don't think Leviathan has ever "breathed" water, but I still gotta say Leviathan. That looks like water to me. I suppose the popular vote will be left, but it looks like Leviathan to me. WestleyCole 16:48, May 20, 2011 (UTC)

Mist Dragon is a Japanese dragon in the DS version. "Like these other Asian dragons, most Japanese ones are water deities associated with rainfall and bodies of water, and are typically depicted as large, wingless, serpentine creatures with clawed feet."Keltainentoukokuu 17:00, May 20, 2011 (UTC)

Yeah, I saw what you meant, Jimcloud. That was the similarites I mentioned. Probably should've clarified that before... Anyway, for the most part I agree, but the water is also there. I imagine it *could* be mist, or maybe not and Keltainentoukokuu's explanation could be right, too. I just don't think so. I guess it's just a difference of opinion at this point. I still think it's Leviathan, but that's just me. You're certainly free to leave it as is. WestleyCole 17:11, May 20, 2011 (UTC)

As far as I can tell, Leviathan doesn't even have arms, but fins. Mist Dragon does have arms. I think the answer should be obvious now, though I figured as such from the color alone. - Flintlock Vitor 17:32, May 20, 2011 (UTC)

And I'm amazed no one said this before: there is no reason for Rydia to be able to summon Leviathan in that FMV. Why? Because she doesn't learn to summon him during the story. Mist Dragon is part of the plot at several points in the story. However, to summon Leviathan, you need to complete a side-quest. So it doesn't make sense to put Leviathan instead of Mist Dragon in that the opening FMV of the game. KujaRhapsodos 18:01, May 20, 2011 (UTC)

It's obviously the Mist Dragon in the FMV. 1) Leviathan's signature attack is not a breath. 2) Leviathan is NEVER plain white. 3) Leviathan is not one of adult Rydia's default Eidolons. 4) Radiant Breath's summon sequence a lot like the FMV scene. - Henryacores^ 19:28, May 20, 2011 (UTC)

(Well for starters none of us would be here)