Gilgamesh: Enough expository banter!
This talk page is used for discussing improvements to the page "Ragnarok (Final Fantasy VIII)". It is not the place for general discussion or sharing stories about the topic of this article.

Airship? don't you mean Military Aircraft? (that thing is a weapon after all) do you know what an Airship is?

What's the technical term for The Ragnarok? What's it used for? Who Made it? what are it's design characteristics, performance, armament?

does it play the national Anthom whenever you put the pedal to the metal, you know that sort of thing.

all this information is easily avaible out on the internet, you know.

If you have all this info that why not add it to the article. We improve our articles by having a bunch of people add their two cents.Thai420 03:42, 8 August 2006 (UTC)

I am Really curious where those statistics came from, is it somewhere in game? or an official website or an ultimania? yoshiyuki17 11/27/10

Each member plays different cards. For example there is one who always plays the next card (cards?) you do not currently have, and it is against this player whom you can repeatedly Card Mod and win back the card.

And other players have different rules IIRC. These should be mentioned.

Already has such section and all of them play the next card you're missing.Keltainentoukokuu (talk) 15:36, December 1, 2012 (UTC)

I thought they all did. I lost Quezacotl to one of them and then was like, screw this and played someone else, and they were playing Quezacotl right away. Then I thought I got all cards back in order. Some guides tell you to play against CC Diamond but I thought I got my cards back in order from Xu. But it's been yeaaarrrrsss though. And PC version.Keltainentoukokuu (talk) 15:47, December 1, 2012 (UTC)

The sword and the ship[edit source]

I'm just going to put this out there. 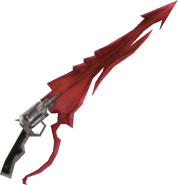 The ship.
Add a photo to this gallery

Just an observation, don't know if it's worth mentioning in the article or not. But it's one of those "once you see it, you can't unsee it" kind of things. I guess if there were ever going to be a Ragnarok sword in FFVIII, we have a good idea what it would look like! Espritduo (talk) 17:01, January 25, 2013 (UTC)

This doesn't have anything to do with the airship itself but the theme "Ride On". Should the theme get its own page since in has quite a few appearances and other themes have pages with less on them so just asking, should it?--Xion V. (talk) 09:16, September 18, 2016 (UTC)