Gilgamesh: Enough expository banter!
This talk page is used for discussing improvements to the page "Mog (Final Fantasy XIII-2)". It is not the place for general discussion or sharing stories about the topic of this article.

To not start edit war we can mention that Serah is seen hugging Mog as an allusion to how Terra from FFVII loves hugging moogles.
Proof: 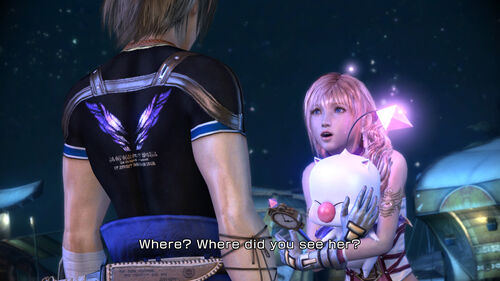 Loving that trivia, but I wondered if we could also mention the fact that pig/cat comparisons have been made at Square Enix before, in The World Ends With You: Neku constantly refers to Shiki's stuffed cat (Mr Mew) as "Piggy". Kupo Mog Talk 00:43, January 11, 2012 (UTC)

I never played TWEWY, but your information was also mentioned in the comments of the demo walkthrough video, so I think one can add is as well, but as ** to indicate that it's still about "Piggy Kitty" (also, my brother finds that phrase hillarious as me). And thank you for the comment about the trivia *blushes*—Kaimi (999,999 CP/5 TP) 00:47, January 11, 2012 (UTC)

Does anyone else think that Square should make dolls that look and talk like Mog? They would be the cutest things ever! FFfangirl 11:04 a.m., January 12, 2012

Correct me if I'm wrong here, but I believe Mog may be the first Moogle to actually have a voice actor, and would thus be the first Moogle to audibly demonstrate how "kupo" and its variants are pronounced. (Before this, all we had was the generic sound effect.) If this is true, I'd like to add this trivia to the relevant pages - this one and Kupo, and probably the Project:DidYouKnow page. --Hoogathy 19:10, February 13, 2012 (UTC)

Hmm, the Montblanc page only lists a voice actor for him for a "Radio Drama." It's been a long time since I played FFXII, so I have no idea if he ever says kupo audibly, if he has a speaking part at all. I only recall some text conversations with him at the Clan Hall. --Hoogathy 19:16, February 13, 2012 (UTC)

Radio Drama is his only speaking role, but even this does not make him the first speaking moogle; trivia section says "Montblanc is the second fully voiced moogle, the first one being Moogle Kupo from Final Fantasy: Unlimited." So Mog from FFXIII-2 would be the third voiced moogle, and it is implied that kupo is said out-loud in Unlimited in the Moogle page.Keltainentoukokuu 19:21, February 13, 2012 (UTC)

My Mog seems to be unable to use his treasure hunt ability, even though he does sense tresures and flies to their locations. I am still quite early in the game, secons Chapter, the one that was featured in the demo. Is there a specific point at which Mog learns to treasure hunt? Or am I simply doing something wrong? 77.115.158.78 10:55, February 20, 2012 (UTC)

I don't think we can say Mog has a theme...that one's not too remarkable as a player may never encounter either event it plays in during a playthrough. Shame though, I didn't realise before this Mog is the only character who doesn't have a leitmotif. Lightning, Hope, Caius, Yeul, Noel, Serah...but no Mog.Keltainentoukokuu (talk) 15:43, July 26, 2012 (UTC)

Reviving the topic here. Since Mog is in both XIII-2 and Lightning Returns, should we rename this page to some like "Mog (Final Fantasy XIII Series)" or something like that? 'Cause the page title right now suggests that Mog is exclusive to XIII-2. Kamikaze839 17:50, July 3, 2014 (UTC)

Retrieved from "https://finalfantasy.fandom.com/wiki/Talk:Mog_(Final_Fantasy_XIII-2)?oldid=2197378"
Community content is available under CC-BY-SA unless otherwise noted.