Gilgamesh: Enough expository banter!
This talk page is used for discussing improvements to the page "Kefka Palazzo/Dissidia (PSP)". It is not the place for general discussion or sharing stories about the topic of this article.

OK same as Sephiroth I may made a mistake on Kefka's so it may wrong feel free edit.NeoBahamutZEROX 03:53, 25 January 2009 (UTC)

I've heard countless fan requests and rumors that Mark Hamill should voice Kefka in Dissidia. After listening to how he voiced the Joker, I agree - Mark Hamill could play Kefka perfectly. Watch this video, and I think you will too. Drake Clawfang 18:49, 19 February 2009 (UTC) Template loop detected: Template:Video

I too am interested in seeing the results for the English cast, but sadly, sometimes the news could be too much to take. Possibilities are that they might not get Hamil, I mean, it would be a God-blessed moment if it was true. User:Werehog21 3:13 PM 5/11/2009 (UTC)

At first I wasent on board with the idea of Hamill playing Kefka cause it just seemed like alot of fanboys trying to link the two together more,but its reall grown on me.
The more i hear Hamills Joker (especialy when people pick out the most Kefkaesqe lines for him) the more i love the idea.
Ive acctualy been playing FFVIA recently anf Hamills voice is the one i hear whenever Kefkas lines come up.
Though at the same time its important to remember that its subject to the whim of SE, and its likley Hamill wont get chosen, so its probably best not to get to used to the idea. FinalFighterA+ 07:06, 1 June 2009 (UTC)

After listening to the Dissidia US Gameplay Vid from Gametrailers.com, I heard Dave Wittenberg's voice when Kefka was talking! So there may be a possibility that Dave will be voicing Kefka. Werehog22 4:03 PM 7/12/2009 (UTC)

Explain to me why we have to create an entirely separate attack box for an attack that is exactly the same in every way, and can be performed in air or on the ground. Explain why we can't just put "ground/air", since they're the same attack. Drake Clawfang 01:10, 25 February 2009 (UTC)

Because there are dickheads that can't destinguish the kana for air and ground in the game and each attack is learned at a certain level. When Dissidia is released and the names on the tables inverted (English name goes up and Japaneses name goes down), we can do that. - Henryacores^ 01:22, 25 February 2009 (UTC)

Can we please have a source for them? A lot of the attack names in Japanese are...well, I'm not sure how to explain. A number of them rely on Japanese onomatopoeia, so the English translations are somewhat...loose. "achimochi sandaga", for example, would be better translated as "Here and There Thundaga", rather than "Quick Thundaga", and "bara bara burizaga" as "Scattering Blizzaga". — YuanSaluto!Acta 07:09, 13 March 2009 (UTC)

That's why I demanded the japanese text to be featured in all skillcharts. There's no way in hell that we can find out what the real english name will be here. - Henryacores^ 14:07, 13 March 2009 (UTC)

That makes no sense. If you'll look again, it is flipped. It has nothing to do with him holding Zidane's tail or whatever. Compare the sleeves from FMV to artwork. Drake Clawfang 22:28, 11 May 2009 (UTC) 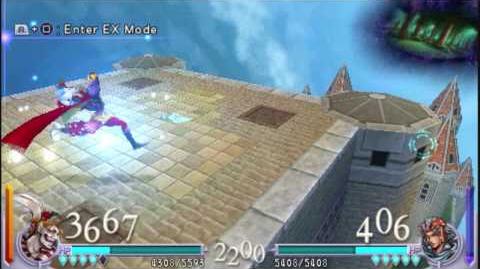 That voice is gonna seriously freak me out at least once when the game comes out. "That was titillating". Reminds how big of a creep Kefka really is. Drake Clawfang 16:55, 27 July 2009 (UTC)

After hearing him in-game, I love his voice even more! You can hear the barely-contained madness bubbling just beneath the surface. I can't hear him speak without giggling. Silver Dragon XXVIII 21:10, 26 August 2009 (UTC)

I'm in tears right now. I've told you people, and demonstrated, that IMDB's information isn't worth dirt, and yet people insist on it being right...I give up. Drake Clawfang 19:04, 7 August 2009 (UTC)

To those who have doubted Kefka's awesomeness in the past, I give you, this quote from the English version.

"He's (Sephiroth) just another sadist with a god complex, like THAT'S anything special!"

Wait minute, does he actually said that in the game? That hilarious, make me love Kefka even more. Maybe more then Sephiroth.  NeoZEROX

Template loop detected: Template:Video Ok, but is he taking about Sephiroth? It doesn't show him.  NeoZEROX

He is talking about Sephiroth, the conversation is at the very beginning of Cloud's story. Silver Dragon XXVIII 00:51, 29 August 2009 (UTC)

I already know that. Cloud's story was the first one I play. But thanks for telling anyway. :)  NeoZEROX

What's even funnier is that Kefka's description of Sephiroth also applies to himself. Kefka really needs to know himself a lot more before he makes that kind of insult, since he's also in a way insulting himself. Weedle McHairybug 00:27, August 22, 2010 (UTC)

im sure you know but kefkas hyperdrive goes up in the air now should that be edited on kefkas pageSorceror bobby 20:43, September 7, 2009 (UTC)

Any bare similar to FF6?

Actually, I think his Dissidia opening quote against Ultimecia is more of a reference to Final Fantasy VIII than Final Fantasy VI. Sorceresses were known to pass on their power when they did not want it or were about to die; thus, Kefka is asking Ultimecia to give him her Sorceress Power. Dogurasu 21:10, May 9, 2011 (UTC)

I've been playing the UK version of Dissidia, and I'm pretty certain it'll be identical to the US version My Kefka is level 26, he has Waggly Wobbly Firaga in the Air which he shouldn't have till his mid 40s and same with his Arial Scattershot Blizzaga He doesn't also have either Ultima which he should have apparently learned about 20 levels ago So it seems that the Western and Japanese releases have very differant rates for learning Kefka's attacks

Well I learned Ultima at level 28, both ground and air, but I'm sure people will want both US and JP level listings and since I don't know much about layouts and workings of the wikis I'll have to refrain from adding in myself, my apologies -- Dark Paladin Danny 18:43, September 10, 2009 (UTC)

In the spirit of universalism...[edit source]

I took upon myself the freedom of adding Kefka's Japanese attack quotes on his quote page, both in kana and romaji (though since I'm not that good at successfully translating Japanese to English, I didn't even attempt translations, arguing that nothing at all was better then something on the level of "all your base are belongs to us")... If anyone feel the urge or the need to add further Japanese information on Kefka, or any other character for that matter, here's the site I got the quotes from: http://playshinra.com/dissidia/chaos/cefca.html 83.189.184.209 12:58, February 23, 2010 (UTC)

this is confusing...every little detail of him says he's male...but that one opening line when he encounters firion...heck i'm not even sure he HAS a gender.

That's a little insulting, really. For one, Kefka is asking "Aren't you hot (under all those weapons)?" concerning temperature. Even if one were to take it in the manner you suggest (which isn't beyond Kefka), WHO CARES? Far be it from me to vilify someone based on a quote (when he can be happily vilified for multiple other reasons) and the connotations thereof. Quite frankly, you don't see this kind of statement on Sephiroth's page concerning all the possibilities behind his quotes - they shouldn't be there, and for that matter, I don't believe they should be here, either. Dogurasu 21:10, May 9, 2011 (UTC)