Gilgamesh: Enough expository banter!
This talk page is used for discussing improvements to the page "Cid of the Lufaine". It is not the place for general discussion or sharing stories about the topic of this article.

Does this Cid even have a fisical form? Is it shown in game?

Cid and Chaos appear to have a connection...[edit source]

Remember this quote from one of the cutscenes in Shade Impulse in Dissidia?

"In that world, I was a god that suppressed disorder. But strangely, the images are still vivid in my eyes... All the people smiling, the warmth of the days I spent with Cosmos... For one who has lost all memory, why did the dream have to be so cruel?"

If you were to look at the word 'god' from a different perspective, Chaos may have meant 'god' as in being high up in the skies - of which Cid of the Lufaine was, since he created the Flying Fortress. It is also a common thought that gods and goddesses are up in the sky, thus.

The people smiling appear to be the citizens of which Cid ruled over, suppressing disorder as he appears to have done in the past of FFI. And considdering Chaos was from FFI, that would mean his memories that he is recieving is from somebody from that world.

And this is where it gets tricky... It appears that Chaos refers to Cosmos as somebody who he ruled with, and Cid ruled with his wife. Cid also wanted to keep his wife's memory alive after she was murdered, and sold his physical form to Shinryu to continue his research. This has lead me to believe that Cosmos' appearance is based off of Cid's own wife. If this is true, then that would mean that Cid's own memory was merged with that of Chaos - thus, this is how Chaos was able to remember the 'past life' (in a sense).

... Just a thought. There's no need for you to take is as truth, but I thought it was worth pointing it out.

However, enraged by Cid's betrayal, Shinryu trapped him in a nightmare world where Chaos survived and cycle of conflict continued with Cosmos's side the victor until Chaos turns into the mindless Feral Chaos. During the twentieth cycle, Chaos attempts to kill Cosmos with Cid saving her by sealing her in the Cavern of Earth before sealing away the northern continent from the battle between Shinyuu and Chaos before the latter is sealed in a volcano. From there, Cid summons the five final summoned warriors to destroy Chaos forever. Soon after, Cid takes on the physical form of a moogle, one of the few creatures that remain in the world. Upon Feral Chaos being destroyed, the nightmare world collapses and Cid is freed along with all the warriors who were trapped in it.

Is that real? Like, I know the whole Dissidia storyline turns itself somewhat inside-out, but does it really do it that badly? Bluestarultor

Apparently it is like that.However the cycle only continues with the alternate dimension in which Cid id forever tormented it.In the true dimension Chaos is destroyed and Cosmos is still inhabiting her world as it slowly beginning to extinguish around her.--Lord of the Dark Depths 00:08, April 8, 2011 (UTC)

Shouldn't the references to raising Garland be changed to Chaos, due to the 012 Reports? -- Lycentia

Except that they aren't. Their exact relationship is unclear, but God of Discord Chaos is a separate entity with his own backstory who either merges with or exists separately from Garland's Chaos. Dazuro 18:24, April 9, 2011 (UTC)

Wrong.Garland and Chaos acknowledge the fact they are same person.Here is the proof:http://www.youtube.com/watch?v=FIK4Z8_f7hk --Lord of the Dark Depths 22:06, April 9, 2011 (UTC)

Yet Duodecim heavily implies if not outright states that Chaos was created independently of Garland, hence my suggestion that they somehow merged. Dazuro 22:18, April 9, 2011 (UTC)

Well they did indeed merge but have the same history as a result of time loops and interdimensional rifts.Lord Chaos

I think everyones missing the main point. When the only name you can give a child is "Chaos," it should raise red flags.

Should an image of the Warrior of Light be posted on this page? As the WoL is a "perfect" manikin of Cid, they should look the same. The only difference noted between them is the Warrior's lack of memories, due to an incomplete memory transfer ritual. 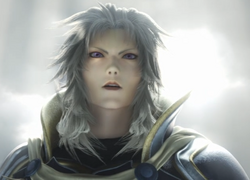