Edit
watch 11:34
World of Final Fantasy: Thane of Saronia Boss Fight
Do you like this video?
Play Sound

Non-player character
Takka, or Taca in some translations, is a non-player character from Final Fantasy III. He is the blacksmith of Kazus, and, in the 3D remake, Refia's adopted father, whom he wishes to train to be as fine a smith as himself.

Takka was cursed by the Djinn and did not have a mythril ring to break the curse. He and Refia helped build the airship for Cid Haze, and Takka eventually helps build the mythril ram for Cid's airship so the Warriors of the Light could travel out to the world.

Later, Takka mentions the Legendary Smith when he is unable to fix Princess Sara's pendant. 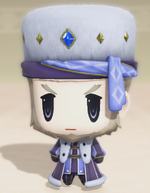 Who's Who
Thane of Saronia
CV: Joe Ochman / Ryo Horikawa

Sentient Soldier
Refia's uncle Takka was merely the guise for a Bahamutian soldier—but not just any soldier. Unlike the other Bahamutian grunts Lann and Reynn have encountered, this one is capable of thought, speech, and self-determination. No wonder Segwarides entrusted him with an entire nation in the Federation.

Who Is He?
Refie's uncle Takka perished when his body was seized by the Bahamutian soldier. Consider for a moment the similarities to how Reynn and Lann's parents were taken over, and the picture becomes a little clearer.

Segwarides summoned him to Grymoire, but he is not an Exnine Knight. Who, then? What you can take away is this: there may be many entities out there who, while unable to become Exnine Knights themselves, fight alongside them all the same. How fascinating that a manipulator of destiny like Segwarides summoned someone who obsesses over destiny in order to change destiny.

In the end, however, destiny had its own plan: that the thief who stole Takka's body face the consequences, and be undone by Takka's own nemesis.

First World of Origin:
FINAL FANTASY III: As Takka, in the remake

The party and Cid speaking with Takka in an early screenshot of the game for the DS release.