Tachi: Enpi is a Great Katana weapon skill. It is usable by Samurai (level 1) and Ninja (level 1). It is a two-hit attack. It provides a TP enhancement to Damage. It can skillchain into Scission and Transfixion. It requires a combat skill of 5.

Enpi is a weapon skill usable by Samurai from level 15 onward. It delivers a ranged attack with a potency of 100. It does not have a combo bonus as such, but if it is used after Hissatsu: Yaten (which grants Enhanced Enpi for 15 seconds) the potency increases to 300 and it adds 10 to the kenki gauge. (As this is not a "true" combo, other weapon skills can be used between Yaten and Enpi without breaking the combo. It does not build sen gauge.) 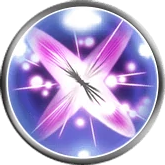